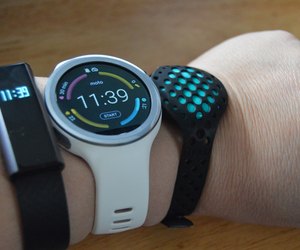 We're inundated with devices designed to monitor and improve your health--exercise devices, apps, digital scales, and even "smart" clothing. Of course, fitness bands have boomed because they are easy to incorporate into your life, affordable, and provide motivation for becoming more active. But which fitness band is right for you? And perhaps more importantly, do they all measure the same things, in the same way?

For one month, I literally wore three bands at the same time to compare how well they worked: Motorola's Moto 360 Sport, the Moov Now, and the Amazfit Arc.

First off, I don't recommend wearing three fitness bands at once. I did this a lot throughout my testing period and it felt like I was wearing handcuffs, which isn't particularly comfortable. It's not very cool looking, either. I thought wearing multiple bands would give me an 80s Swatch vibe, but they all look very different and don't really mesh well together. Also, the looks I got from other people told me that this fashion statement went over as well as a Members Only jacket.

But I digress. This wasn't about looking cool, but about seeing how these bands compared. First, let's break down each one.

Out of the three models tested, the Moto 360 Sport is a standout—and not just for its $199 price tag. It's priced so high because the Moto 360 Sport is far from the typical fitness tracker. It's actually an Android Watch, which means it can keep track of appointments, email, Instagram posts, and more (and it works with both Android and iPhone). It can even lock your door, if you integrate it with a smart front door lock like the Kevo Smart Lock. 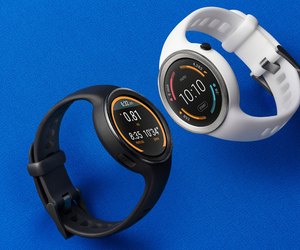 However, that also means it's heavy. Weighing in at about 2.5 ounces, the Moto 360 Sport only comes in one size, which I found it be a bit bulky. That weight doesn't mean it has a longer battery life, either. In fact, if you plan to stay motivated, you should charge the Moto 360 Sport every single day.

It should motivate you, too. The Moto 360 Sport has GPS features, timers, and can also be customized with a variety of watch face. I preferred the Sport face because it kept a timer and stats on steps, heart rate, and calories burned at my fingertips.

Despite the bulk, the Moto 360 Sport is attractive. The band is sturdy (which is good, since it can't be swapped out). Also, this model is IP67 rated, so it's dust- and water-resistant (in no more than 3 feet of water for up to 30 minutes). Motorola warns not to use it while swimming or in any activity that involves "pressurized steams of water." At this price, that probably means you don't want to take it into a tub or shower.

Moov Now gets you moving

The point of an activity tracker is to keep you motivated. However, the Moov Now is designed for people who want to be really motivated.

The $59.95 tracker doesn't actually track steps throughout the day, because the people wearing the Moov Now are already getting their 10,000 in—and then some. Instead, this unit is designed to take you beyond that, providing new exercises, distance goals, coaching, and more. 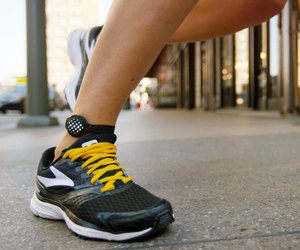 Weighing in around 0.5 ounces, the look of the Moov Now is pretty basic. It doesn't have any sort of display to help you keep track of stats or even the time. The coolest thing about the Moov Now is that it can be worn on the wrist or ankle. It also doesn't have a charger, instead relying on a single long-life CR2032 battery. This is sort of a bummer, since I never seem to have those coin-style batteries around when I need one. However, Moov promises around 6 months' of use, depending on your activity level.

The Moov Now is water-tight. It's made for swimming and sweating profusely, enclosing the battery in a plastic circle, which is tucked into a black band with a mesh design. This is great for washing and swimming, but I did find myself regularly cleaning lotion out of it.

While the actual device doesn't have any sort of display, the app is bursting with options for running, walking, biking, swimming, and more. Each section is designed to improve your performance, challenging you on-screen and in your ear. Yes, the Moov Now has an in-app coach to keep you focused via headphones, even over stored and streaming music. Of course, that also means to be truly effective, you need to keep your phone handy while working out.

Amazfit Arc delivers on the essentials

At $69.99, the Amazfit Arc doesn't include Google access, motivational speeches, or special exercises. It's just a fitness tracker, but it does the basics quite well, tracking both steps and sleep patterns. However, it also delivers a few extra features, including info on calories burned and an optical heart rate sensor. It tells time and has vibrating alarms to alert you to incoming calls or a wake-up call. 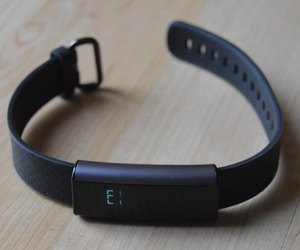 Weighing in around 0.5 ounces, the Amazfit Arc is very slim. It actually looks a lot like a ladies' watch, with a buckle to attach it to your wrist. The front has a 0.42-inch OLED display that can cycle through the time, steps, distance, calories, heart rate, and battery life with a simple swipe. Like the Moto 360, this model can be charged via USB, but offers up to 20 days on a single charge. I found that to be pretty accurate, since I only needed to charge the Amazfit Arc once during my 30-day test period. (And really, that was because I didn't want to test the battery's limits while I was out and about.)

Also similar to the Moto 360 Sport, the Amazfit Arc is water-resistant, not not water-proof. That means you don't want to dive into a pool with it on. However, it did survive several showers.

Amazfit has paired this wearable with an app that's easy to use and read. It pretty much displays everything that's on the actual device, but adds in sleep data and a timeline so you can track your patterns.

Pitting these three models against each other proved to be far more difficult than we expected. First of all, the Moov Now doesn't track daily steps, though it does count them during specific activities. Otherwise, it does keep a record of the amount of time you're being active.

And despite keeping track of pretty much everything in your life, the Moto 360 Sport does not track sleep (while the others do).

If that's a concern, the Moov Now and Amazfit Arc are both good options. Both models tracked my movements throughout the night, noting when I had deep and not-so-deep sleep. Even better, they were very consistent with each other. 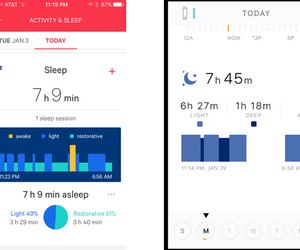 Case in point: During the week, I fall asleep every night at the same time. And since I have a 17-year-old dog, I am usually woken up at the same time in the middle of the night. Both trackers noted these ups and downs throughout the month.

Step counting varied quite a bit, though. As mentioned, the Moov Now does not count steps unless you are performing a specific activity. For instance, on a typical day, I hit the treadmill for 15 minutes with the Moov Now, the Amazfit Arc, and my 2-year-old Fitbit Flex. The Moov Now clocked 1,883 steps; Amazfit Arc capturing 1,466 steps; the Fitbit claimed 1,485. The Amazfit and Fitbit were in rough agreement and the Moov Now seems a bit high, but who's to say which set of readings is technically more accurate? Indeed, the Moov was also attached to my ankle versus my wrist—as recommended for running/walking by the company. It's not inconceivable that this generates more accurate data.

Overall, the Moto 360 seemed the most inconsistent--and frustrating. Some days, it was right on par with the counts tracked by the Amazfit Arc and the Fitbit Flex. There were other days where it was hundreds of steps off. 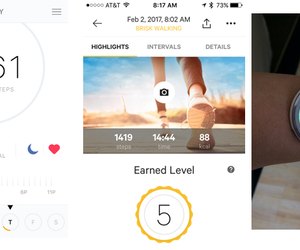 Stats from the Amazfit Arc (left), the Moov Now (center), and the Moto 360 Sport (right) from the same 15-minute walk
credit: Rachel Cericola/Techwalla

One day, I took a walk with my dog with the Moto 360 Sport, the Amazfit Arc, and my Fitbit Flex. In addition to relying on the bands to do their automatewd tracking, I made an effort to count steps manually. The Amazfit Arc tracked 2,121 steps, while the Fitbit registered 2,244. My personal "manual" count was about 2,100. In contrast, the Moto 360 Sport gave me a whopping 3,458 steps, which was clearly the outlier.

Since my counting skills could have been off, I took several shorter walks, around 500 steps each. The Amazfit Arc typically came in close, with the Moto 360 Sport typically more than doubling the amount. One day, I left the house with the Moto 360 Sport listing 4,502 steps on the face. By the time I finished my 2,000-step walk, it was reading 3,116—and no, I didn't walk backwards.

The little things add up

Even worse, the battery life caused the Moto 360 Sport to die when I least expected it. While the average battery life was about a day, a high activity level can cost you a lot of battery. This is something I often did not realize until it was too late.

Two of the three models feature built-in heart monitors, (the Moov Now offers that as an add-on option). I tested both against my in-home blood pressure machine. The Amazfit Arc registered 78 bpm, while the machine listed 80. It's not perfect, but it's pretty darn close. The Moto 360 Sport gave an equally impressive reading, clocking in regularly within two points.

Another thing worth noting is that the Moto 360 Sport regularly disconnected from my iPhone, severing my wrist access to the internet. You don't need to be connected just to track steps or your heart rate, but having that online access is what makes this higher priced option worth the money. It would often reconnect on its own, but sometimes needed a little manual intervention.

Also, despite the cool features and appearance of the actual product, the Moto 360 Sport had the least exciting mobile app. It doesn't provide access to Instagram, Google, or even timers. Worst of all, it doesn't store any of your exercise info. Instead, it's really just a portal to tweaking the watch's settings.

So which one works best?

After a month of mixing, matching, and tracking, I realized that picking a fitness band is a really personal experience. If you're addicted to the web, the Moto 360 Sport would probably be your first choice. That said, it does have a lot of quirks that even a web geek like me couldn't stand. The hardcore workout enthusiast, on the other hand, would probably love the motivation provided by the Moov Now. 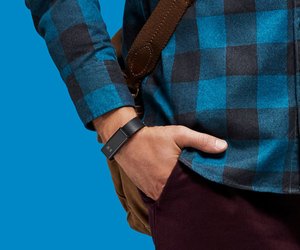 However, my definition of a fitness tracker is much different. I see a fitness tracker as something that counts steps—period. Anything above that is icing on the cake. That puts the Amazfit Arc at the top of the list. It's pretty comfortable, with a nice battery life and an easy companion app. It also did what it's supposed to do. If your main goal is to be a bit more active, this model can make that happen at a really attractive price, adding in some nice perks, including sleep tracking and heart activity features.

Around The Home
Smart Home
By: Dave Johnson

Headphones for the Pool: Finis Duo vs Sony Waterproof Walkman

Around The Home
Productivity
By: Aoife M. McEvoy