Can You Use a FiOS Router With Time Warner Internet?

Verizon's FiOS service provides high-speed Internet connections to users over a fiber optic network. FiOS isn't available in all locations, so FiOS subscribers who move to new areas may need to obtain Internet service from other providers, such as Time Warner Cable. Former Verizon customers who have purchased a FiOS router may wonder whether it will work with Time Warner's Internet service. 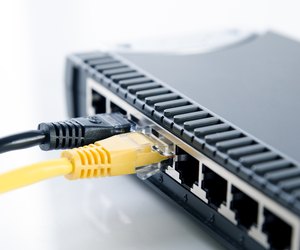 Can You Use a FiOS Router With Time Warner Internet?
credit: Piotr Adamowicz/iStock/Getty Images

A FiOS Internet connection uses pulses of light traveling across plastic, fiber optic cables to carry data to and from a user's home or office. A device known as an Optical Network Terminal converts these pulses into electrical signals that can be interpreted by computer networking equipment, and the signals are then sent to a router via an Ethernet cable. The router distributes the data signals to computers and other devices, just as occurs on any other home or office network.

Time Warner uses standard television cable rather than FiOS to deliver Internet service to its customers. Data signals are carried over the cable network to a cable-compatible modem in the user's home or office. Like the FiOS ONT, the cable modem converts the signals to a form that can be interpreted by computers and other devices. A router is typically connected to the modem using an Ethernet cable, allowing the Internet connection to be shared by multiple computers in the user's home or office.

Because routers used with Verizon's FiOS Internet service do not have fiber optic components, these devices will function on any Ethernet network, including those that do not receive a FiOS connection. The routers are Verizon-branded, but they are identical to corresponding models of unbranded routers. Customers of Time Warner and other Internet service providers can use these routers on home and office networks in the same way that they would use them to receive FiOS service from Verizon.

The Parts of a Computer Network

How to Enable Multicast & uPNP Technology on a Netgear Wndr3300 Router

How to Enable a UPnP 2Wire Router on U-Verse

Around The Home
Productivity
By: Denise Sullivan

How to Reset a Router Back to the Factory Default Settings