Light Up Your Nighttime Workouts

Most folks who go out for a run at night want to come back. The same holds for people who take a bike ride in the early morning hours. It's dangerous out there in low visibility, especially if sidewalks are rare where you ramble. Fortunately, there are some great innovations to light up your runs, walks, and bike rides during low-light conditions. 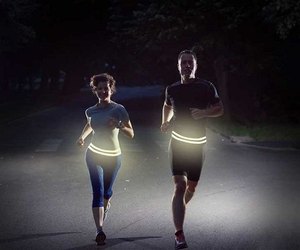 The FlipBelt may be the best running belts out there. It's a stretchable, comfortable band that you step into and pull up around your waist. It's made with moisture-wicking micropoly fabric and reflective 3M materials. Around the belt you'll find four pockets and a hook for keys.

I had an opportunity to run with this belt for a number of weeks and it was wonderful. The entire belt is reflective, so you feel as if you're wearing a giant halo around your waist. That makes you very hard to overlook when you're running on a street at night.

What puts the FlipBelt over the top is how well it carries your stuff. I used to run with an armband to hold my cell phone. Not anymore. The FlipBelt prevents bouncing, which even the best armbands (not to mention Fanny Packs) do not. You can fit very large phones—mine is an iPhone 6s—comfortably into the belt and barely feel them at all. And though I expected my large collection of keys to create an uncomfortable bulge, the FlipBelt almost magically swallowed the whole set, and the keys didn't dig into my waist. Money, headphones, IDs—you can fit a lot into the FlipBelt; the company even makes a specialized water bottle that fits into it.

Of course, the FlipBelt can be used for many other activities besides running, too—from biking to weight training. The FlipBelt retails for $33. 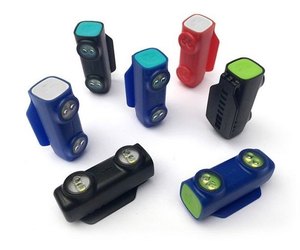 Also from FlipBelt is the Million Mile Light. This 2.5-inch tall rectangular light clips onto your belt, and its lights are motion activated. As you run, they turn on, so you never have to worry about batteries or the light going out in the middle of your run. The LEDs are quite bright at 30 lumens and are visible to motorists up to 200 yards away. That should give drivers plenty of warning.

The Million Mile Light is weatherproof and splashproof, and its IPX4 rating means that if you get caught in the rain, the light won't short-circuit. It's also very light at 1.5 ounces, so wearing the light feels barely noticeable while it makes you extremely noticeable. I tried this light and was pleased with its performance. You might even consider buying two—one to wear on the back of your belt and one on the front.

The Million Mile Light retails for $20.

How to Make Water Bottle Rockets With Eggs

Around The Home
Productivity
By: Ezmeralda Lee