It's hard to resist picking up an old View-Master. It's the kind of iconic toy that brings back memories. Now, thanks to a collaboration with Google, the device has a new lease on life: Mattel has introduced the View-Master VR viewer, bringing a toy born in the land of stereoscopes into the ultra-modern age of virtual reality. 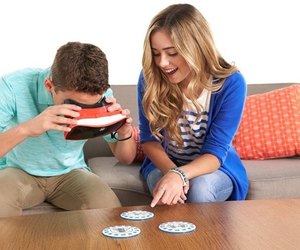 Like most virtual reality headsets, the View-Master VR viewer is designed to use a smartphone as the screen. You snap the phone into the device and watch as an amazing virtual world comes to life. The content resembles that of the original View-Master, whose strong suit was taking viewers to exotic locations, from ancient Rome to outer space. The View-Master VR offers Experience Packs titled Space, Destinations, Wildlife, and Underwater.

Purchase an Experience Pack and then download the associated app. To unlock the app, you scan a Pass Code or QR code that is included in the Experience Pack. The device can also run all Google-compatible smartphone apps and other VR apps on Google Play, a list that is rapidly growing—so you're not limited to the Experience Packs. 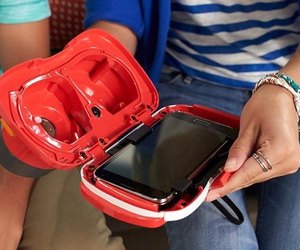 In a neat twist that other virtual reality headsets lack, the View-Master VR offers an augmented reality feature that overlays virtual images on your physical surroundings. To trigger these images, you'll need the physical reels that come with each Experience Pack. Place a reel on a table and look at it through your View-Master VR. You'll see 3D icons hovering above the reel. These icons act as menus; select one to launch a VR experience.

When you consider that an advanced virtual reality headset may cost anywhere from $100 to $3,000, the $30 you'll pay for a View-Master VR makes it an amazing bargain. Each Experience Pack costs $15. Although the device is designed and marketed as a toy, there is sure to be content your whole family will enjoy, given the expanding library of VR apps. The View-Master VR's appeal to the entire family is very much in keeping with the spirit of the original product. Not only did it appeal to family members young and old, at one time it even caught the attention of the U.S. Army, which saw it as a great tool for training purposes. Did you know that during World War II, the U.S. military bought 100,000 viewers and 6 million image reels? Clearly, the View-Master is no ordinary toy!

Mattel has already unveiled a second-generation version of its View-Master VR dubbed Viewer DLX. The DLX includes an audio headset connection and improved lenses that produce sharper images. It will reach stores in the fall of 2016.

Hands On With the VR Headsets of 2016

Canes to Gloves: 8 Smart Devices For When We Need Extra Help

Around The Home
Smart Home
By: David Isaac