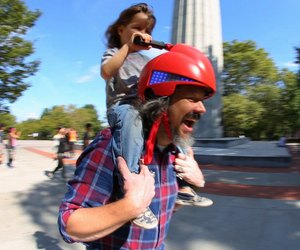 A helmet exists that gives kids the opportunity to drive their parents while riding on their shoulders, and it's both adorable and borderline insane. Piggyback Driver is a helmet that has handlebars, LED turn signals, and a huge red button for honking.

As a parent, you wear the helmet on your head and let your kid literally steer you in any direction, because, let's be honest, that's pretty much what kids do anyway.

It's as if the helmet connects to your brain, but since that would be impossible and pretty intrusive, there are vibrations inside the helmet that tell you which way your kid wants you to go. 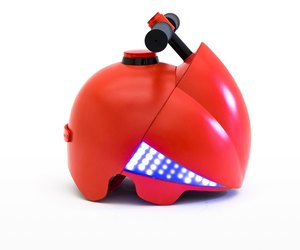 The helmet can detect your steps. The faster you walk, the faster the LED lights on the side will pulse. If you aren't going fast enough, your kid can push the turbo boost button, which lets you know you better speed up.

Check out the Piggyback Driver in action:

The Piggyback Driver is obviously a toy that requires a lot of energy from parents, but it gets the family outdoors and gives you the opportunity to spend quality time together. So is it worth the humiliation? Probably.

Created by Party New York, the company is actively looking for partners to help turn the prototype into a production model. But until that happens, your kids will just have to settle for regular piggyback rides and, you know, not being able to drive you.

How to Reset a WD Drive

Jimmy Fallon Is Going to Tell Jokes for Amazon's Alexa

Zümi Is an Educational Self-Driving Car Kit Worth Checking Out

How to Fix a Hard Drive With Detected Imminent Failure