Funny Questions to Ask Siri, Because We Could All Use a Laugh 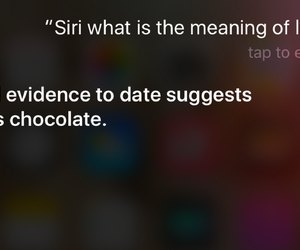 Siri is good for so many things. She can send texts, write emails, set reminders, play songs, call anyone in your contacts, search Twitter, set timers, check the weather, solve math problems, and open up your camera — just to name a few of her abilities.

But Apple's virtual assistant is also good for something else — a laugh. As helpful as she is with mundane life things, she can also be straight up hilarious, witty, and full of snark when prompted with the right questions.

So, what are those right questions? We've got them for you right here, along with Siri's ridiculously funny responses. But don't take our word for it — try them yourself!

When is the world going to end?

Do I look fat?

Siri: "Is your name Bluetooth? Because I am really feeling a connection."

What does the fox say?

Where is Elvis Presley?

Siri: "I believe he has left the building."

What is zero divided by zero?

Siri: "Imagine that you have zero cookies and you split them evenly among zero friends, how many cookies does each person get? See, it doesn't make sense and cookie monster is sad that there are no cookies, and you are sad that you have no friends."

What is the meaning of life?

Siri: "All evidence to date suggests it's chocolate."

Are you a democrat or a republican?

What is your favorite movie?

Siri: "I've heard that 'Blade Runner' is a very realistic and sensitive depiction of intelligent assistants."

What is Inception about?

What came first: the chicken or the egg?

Siri: "I checked their calendars. They both have the same birthday."

Where'd I put my keys?

Siri: "Didn't you just have them?"

How many Apple Store geniuses does it take to screw in a lightbulb?

Siri: "A thousand. One to screw it in, and nine hundred ninety-nine to blog about it."

I see a little silhouetto of a man.

Happy Halloween: Here Are a Bunch of Dogs Wearing Costumes

How to Delete Your Messages in Someone Else's Voicemail Box

Around The Home
Entertainment
By: Michael Roennevig

This Digital Diary Encourages Kids to Get to Know Themselves

Jimmy Fallon Is Going to Tell Jokes for Amazon's Alexa