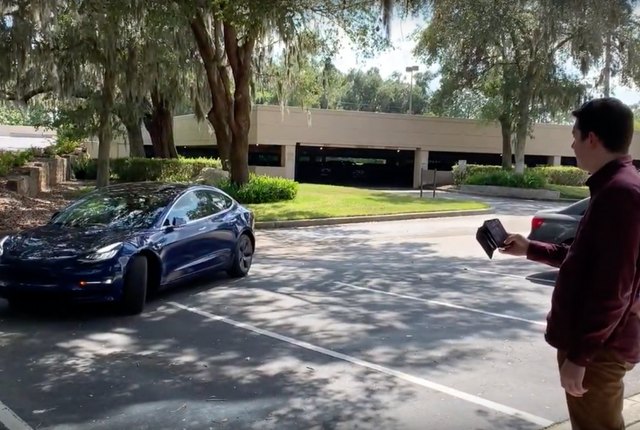 Attention citizens of the world: Tesla's can now drive themselves with no one in them. So, don't freak out—its owner is watching.

As part of its 10.0 software update last week, Tesla owners who paid for the Full Self-Driving capability or the Enhanced Autopilot package have access to a new feature called Smart Summon.

Smart Summon allows owners to be within eye line of the car and use the app to summon the car to wherever they're standing. The feature only works in private parking lots.

"It's the perfect feature to use if you have an overflowing shopping cart, are dealing with a fussy child, or simply don't want to walk to your car through the rain," the company said.

After trying it out for themselves, owners have taken to social media to post videos of their Knight Rider-like autonomous cars—even the videos of things not going so well.

notice how in this video smart summon stops at the crosswalk pic.twitter.com/ez2C5kNsaQ

“Get Enhanced Summon” they said. “Your car will come pick you up” they said. #Bye @Tesla pic.twitter.com/OlTL2Yl6Zi

How to Measure Someone's Size on a Photo

How to Make an Image Look Shaky

Around The Home
Productivity
By: Payton Pritchard

What Are the Functions of Bluetooth?

Around The Home
Entertainment
By: Darla Ferrara

How to Find Cheap DC Motors

Add a Backup Camera to Your Car

These New Car Mounts Will Secure Your Phone While Charging It