5 Components That Are Found on the Motherboard 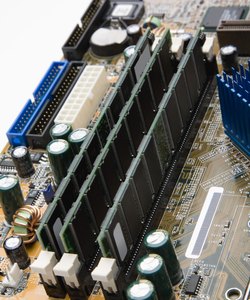 In a typical motherboard layout, the input/output ports are positioned so they align with the back of the computer chassis. The I/O ports on a motherboard typically include ports for a monitor, speakers, a microphone, an Ethernet networking cable and multiple USB devices. Some motherboards may also include ports for legacy devices, such as parallel ports for older printers.

The Central Processing Unit of a computer connects to the CPU socket. The socket contains hundreds of metal connectors for the metal pins or balls on the bottom of the processor. These connections supply power to the processor and transport data to and from the computer's other components. You can only upgrade your computer's processor with one that uses the same socket type.

A motherboard has one or more slots -- typically positioned near the CPU socket -- for installing RAM modules. A computer uses Random Access Memory as temporary storage to hold the program code for running applications and open files. A computer with a large amount of RAM installed can run many programs simultaneously without experiencing a decrease in performance.

A motherboard's expansion card slots allow you to add new components to a computer or upgrade the existing components by installing add-on cards. The most common type of add-on card that a computer user is likely to have experience with is the video card, which performs the calculations necessary to power 3D games and renders the graphics that the monitor displays. Because expansion cards typically have ports for interfacing with external devices -- a video card has at least one monitor port, for example -- the expansion card slots are positioned to line up with the back of the computer chassis.

How to Build an IDE USB Adapter

Types of Slots On a Motherboard

Around The Home
Productivity
By: Fred Flanders

What Is the Difference Between Slots & Ports?

How to Use a HDMI Port in a Computer