There are many different processors on the market. However, there are only a few that you should consider purchasing. Whether you're buying a computer off the shelf, building it from scratch or upgrading your CPU, you must put some time and thought into which processor to buy. The choice you make today will affect your computer's speed and functionality for years to come. 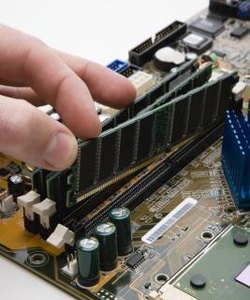 The processor you choose will affect every function of your computer.

There are two primary manufacturers of computer microprocessors. Intel and Advanced Micro Devices (AMD) lead the market in terms of speed and quality. Intel's desktop CPUs include Celeron, Pentium and Core. AMD's desktop processors include Sempron, Athlon and Phenom. Intel makes Celeron M, Pentium M and Core mobile processors for notebooks. AMD makes mobile versions of its Sempron and Athlon, as well as the Turion mobile processor which comes in Ultra and Dual-Core versions. Both companies make both single-core and multi-core processors.

Each processor has a clock speed which is measured in gigahertz (GHz). Also, a processor has a front side bus which connects it with the system's random access memory (RAM.) CPUs also typically have two or three levels of cache. Cache is a type of fast memory which serves as a buffer between RAM and the processor. The processor's socket type determines the motherboard type where it can be installed.

A microprocessor is a silicon chip containing millions of microscopic transistors. This chip functions as the computer's brain. It processes the instructions or operations contained within executable computer programs. Instead of taking instructions directly off of the hard drive, the processor takes its instructions from memory. This greatly increases the computer's speed.

If you're thinking about upgrading your processor yourself, you must check your motherboard specs first. The CPU you install must have the same socket size as the slot on the motherboard. Also, when you install a new processor, you may need to install a heat sink and fan. This is because faster processors produce more heat than slower ones. If you fail to protect your new CPU from this heat, you may end up replacing the processor.

When it comes to processors, size matters. Whether you're buying a new computer or upgrading your old one, you must get the fastest processor you can afford. This is because the processor will become obsolete very quickly. Choosing a 3.6 GHz processor over a 2 GHz today can buy you several years of cheap computing time. Also check the speed of the front side bus (FSB) when purchasing your new computer or CPU. A front side bus of 800 MHz or greater is essential for fast processing speeds. The processor's cache is also important. Make sure it has at least 1 MB of last level cache if your computing needs are average. If you're an extreme gamer or if you run intensive graphics programs, get the processor with the largest cache that fits your budget. There can be hundreds of dollars' difference between the cheapest processors and the most expensive ones. However, investing just a little extra cash can get you a much better processor.

Getting a processor with a dual, triple or quad core can make a significant difference in the processing power of your computer. It's like having two, three or four separate processors installed on your computer at one time. These processors work together to make your computer multitask faster and with greater efficiency. Getting a CPU with a larger front side bus can enhance the processor's ability to communicate with RAM, which will increase your computer's overall speed.

Around The Home
Productivity
By: Jasmine Carpenter How to Find Out the Maximum RAM Capacity for Your Computer

How Is the CPU Speed Measured?

Around The Home
Productivity
By: Adam Parker

What Is the Difference Between Intel I3, I5 & I7 Processors?