Sometimes, the pen is mightier than the mouse -- the light pen, that is. Using a specialized pen and screen, light pen interfaces remove the traditional mouse from the equation and enable you to interact directly with the computer desktop from your monitor. Light pen systems are fairly specialized niche tools, making them considerably less widespread than other input devices. 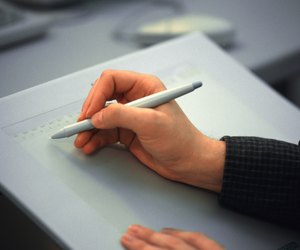 Someone is using a specialized pen on a digital tablet.
credit: John Foxx/Stockbyte/Getty Images

Light pens enable you to interact with the screen with pinpoint accuracy. As you directly control where the cursor and all "clicks" land via the pen, only clumsiness impedes accurate selection. This accuracy makes the light pen appealing in roles where quick, precise selections are required.

Because of the interaction with the screen, light pens require somewhat awkward positioning to be used efficiently. In most cases, even with the monitor tilted, you'll have to lean over slightly to maximize your precision. Depending on the size and orientation of the monitor, long hours of use can also lead to wrist strain.

Light pens are better suited to artistic and design work than a mouse. Drawing smooth, natural lines with a mouse can be extremely awkward, making the practice both inefficient and unappealing. A light pen can be used in much the same way a drawing tablet can, making use of natural drawing motions to develop smooth, clean lines. However, lag issues do tend to make light pens less precise for drawing applications than a graphics tablet.

Light pen systems require a specialized monitor, designed to interact with the pen. In almost all light pen systems, these monitors are built using older cathode ray tube technology, making them cumbersome and exceptionally heavy. CRT monitors are required, as the pen has to detect the electron rays used in the monitor to determine the position of on-screen elements. As light pen systems are fairly obscure, obtaining one may also be difficult, compared to similar interfaces like graphics tablets and touch screen monitors.

Light pen systems can be very efficient for situations with limited desk space. Since the pen requires no mouse pad, only the monitor, computer tower and keyboard actually require space. Monitors equipped with a clip for holding the pen further maximize space economy, eliminating the need to set the pen anywhere on the desk.

Con: Inefficient for General Use

While light pen systems work well for specialized tasks, general desktop computing is better served by other interfaces. The standard mouse and keyboard and touch screen interfaces are easier to manipulate and induce less physical strain than light pens. Being specialized and obscure interfaces, light pen systems may also be more costly to deploy than they're worth -- especially in large-scale or enterprise deployment.

What Is a Digitizer?

Around The Home
Productivity
By: Naomi Vogel

How Does a Graphic Tablet Work?