Structured query language helps you manage data in a relational database. Relational databases use a system of tables to store individual pieces of information. They are known as "relational" because the data is organized based on the relationships between items. There are several different variations of SQL, including Oracle SQL, Microsoft SQL Server, PostgreSQL and MemSQL. 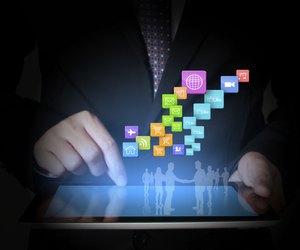 The ability to group several transactions into the same batch for processing sets Oracle apart from its competitors. Microsoft's version of SQL is limited to executing each transaction individually in a sequential order. This gives Oracle SQL far greater scalability over sequential versions of SQL, which are limited to only expanding vertically. Vertical expansion can be significantly more expensive than horizontal expansion. Expanding vertically requires the addition of server memory, hard drive capacity and ventilation equipment. Oracle can expand horizontally by clustering transactions for more efficient processing.

In addition to batch processing of transactions, Oracle offers other methods of improving your database's performance. You can use multiple servers to work on the same database with the Real Application Cluster feature. This can significantly increase your processing power for only the price of an additional server. Oracle SQL also gives you more options to fine-tune the operation of your database to suit the capabilities of your server.

Oracle SQL gives you the flexibility of choosing to run your database in any operating system. Dedicated languages are only compatible with operating systems from the same manufacturer. For example, you can only run Microsoft SQL Server on a Windows-based machine. In comparison, you can install Oracle SQL on a Unix server and benefit from the reliability of Unix while keeping the standardization of SQL. Unix is less vulnerable to many common computer viruses, which keeps your information secure. Oracle SQL is also backward-compatible, so you have the option of upgrading in the future without losing any data.

The cost of operating Oracle SQL puts it at a disadvantage in comparison to other versions of SQL. The cost difference starts with the licensing fees, which may be up to ten times as high for Oracle. Because Oracle SQL is such a complex and highly specialized language, it can be difficult to find qualified database administrators to run your system. When you do find a suitable candidate, expect to pay two or three times more in salary than you would pay a comparable Microsoft or PostgreSQL administrator.

Oracle SQL is also more difficult to learn and operate than its competitors. A user-friendly version such as SQL Server is easy to install and set up with a minimum of customization. It includes five sample databases you can use as a framework for your own company's information. Microsoft also provides Visual Studio-based SQL Server management tools to help you modify the database's design, change the data it contains and execute queries.

The Advantages of DB2

Around The Home
Productivity
By: Kevin Boone

Around The Home
Productivity
By: Sacha Moufarrege

How to Connect to Oracle With SQL Management Studio

Around The Home
Productivity
By: Erica Harisson

Advantages & Disadvantages of Normalizing a Database

Around The Home
Productivity
By: Alan Chester

Around The Home
Productivity
By: Tamara Wilhite