When purchasing a radio, consider which transmission type will suit you best. You may have to determine how good digital and analog services are at the location you intend to use the radio to ensure you make the right choice. If you like the appeal of an old-fashioned analog radio purely for its stylish aesthetics but would rather have the modern satellite transmission method, there are retro-styled digital radios available. It is worth considering that the United States is moving in favor of digital transmission, which may affect the long-term worth of analog models, as reported in PR Newswire Washington. 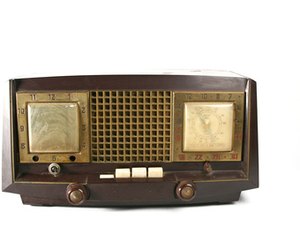 An analog radio works by picking up the audio signal from the transmission site along radio frequency waves known as carriers. This allows listeners to tune into analog stations on FM/AM frequencies from home radio and car equipment. You listen to the electrical radio waves as they are transmitted directly from the radio station to your analog radio. These radios waves are transmitted continuously, without interruption to the sound.

Analog radio waves broadcast a continuous signal, unlike digital transmissions, which means that every note of a melody is heard as a complete sound. This gives analog radio the ability to transmit a truer version of the original recording. Analog radios are eco-friendly by comparison to digital radios, which are computer driven.

Analog radios pick up interference from other transmitting stations with relative ease, resulting in the crackle and hiss that can very often be heard in the background. Tuning into an analog station on your radio is manual and relies on the user selecting the desired station and pinpointing the best signal. Analog radios come supplied with a wire aerial, but this may be insufficient to pick up the best reception and you may need to purchase an additional aerial with better reception capabilities.

Digital radios work by picking up a processed signal which turns sound into patterns of digits (numbers) rather than the radio waves which are used for analogue transmissions. This type of signal uses a different digit for each respective note, which means that when a tune is played over digital radio the sound heard is actually a series of short individual notes rather than one continuous melody. These digital signals are transmitted via satellite to listeners' radios by the same technology as is used for digital television signals.

Digital radios provide a clear sound and with less interference than traditional analog radios. Think of it as the difference between an LP and a CD. Digital signals are not affected by interference from other radio signals, making the sound sharper, and listeners will be able to select channels at the touch of a button without having to search for a station with a clear signal. As digital radios are effectively run by a computer chip with the ability to process information, they have the potential to become much more interactive, with the opportunity to provide additional services such as advertising or real-time weather reports via an on-screen display.

Although digital radios generally have good reception, your radio may not pick transmissions up clearly if it is too far away from the nearest transmitter. Transmissions in your area may be limited, thereby decreasing the number of stations you will be able to hear. If you don't receive a good signal, you may need to purchase an additional aerial to enhance the signal. The Times Online (UK) reported that digital radios use four times the amount of energy than analog versions.

What is the Difference Between Analog & Digital Radio?

Around The Home
Entertainment
By: Lynn Rademacher

The Disadvantages of Digital Broadcasting

How to Make a Radio Into an FM Transmitter

Around The Home
Entertainment
By: Nicholas Smith