Can You Hook a Land Line to a Wi-Fi Router?

Although they provide computing devices with wireless connections to the Internet, Wi-Fi routers, also known as wireless routers, must connect to a wired land line to work properly. At the time of publication, these land lines come in the form of phone and cable lines, each of which is capable of transferring data between a computing device and the Internet at different rates. 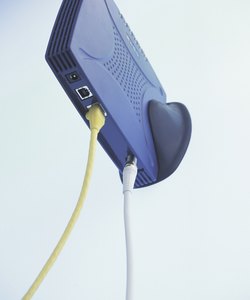 Wi-Fi routers provide devices such as computers and mobile phones with access to the Internet through DSL and cable connections. DSL is typically offered by phone companies, such as CenturyLink and AT&T, while cable TV companies, such as Comcast and Time Warner, supply cable connections. At the time of publication, only Verizon offers a fiber optic cable Internet connection, known as FiOs, which is the fastest in the industry, according to the High Speed Internet Access Guide.

DSL Internet connections transfer data at up to 15 megabits per second, while cable connections can reach speeds of up to 105 Mbps. Verizon's FiOS connection transfers data at up to 150 Mbps. These speeds -- obtained in optimal conditions -- can vary based on an assortment of factors, including network traffic. Although the router receives the data at these rates from land-line connections, your computer's Wi-Fi technology determines the rate at which it processes the data.

At the time of publication, the Wi-Fi family includes the 802.11a, 802.11b, 802.11g and 802.11n standards, each of which transfers data at different rates. The 802.11b standard was the first to hit the market and is capable of transferring data at up to 11 Mbps. The 802.11a and 802.11g protocols were the next to arrive and transfer data at up to 54 Mbps, while the 802.11n protocol is the newest and fastest, transferring data at up to 600 Mbps. Which of these standards your computer is equipped with ultimately determines the rate at which your computer processes data. For instance, if you have a cable connection that reaches speeds of up to 105 Mbps but your computer only has the 802.11b standard, your computer will process the data at just 11 Mbps.

Most routers have a five-device limit that, when reached, can result in slower data transfer speeds. Wi-Fi routers come with the option of protecting your wireless network by activating its security lock feature, which limits who can gain access to your network. This security lock requires users to enter the router ID to gain access to the router and its network. Limiting access to your router can help preserve the number of connective slots available.

What Are the Different Internet Speeds?

How to Reset My Comcast Router

Why Is the Wireless Light Just Blinking?

How to Set Up a Belkin Router

What Is T1 Internet Speed?

Around The Home
Productivity
By: KurtJ