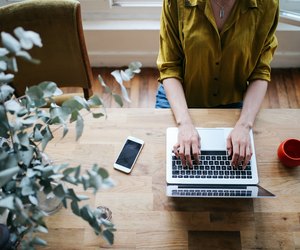 When most computer experts think about the hardware involved in creating a functional keyboard, they first focus on the specific groupings of keys required to accomplish all the complex tasks involved in modern computing. The keys of the keyboard are commonly divided into the following groups: the QWERTY pad, the number pad, the arrow keys and the F bar keys.

The QWERTY pad acts as the workhouse of the keyboard, allowing users to form words across a variety of languages and meanings. The QWERTY pad includes all the keys that display letters. It includes the space bar, which is found beneath the character keys.

The F bar is defined as the horizontal arrangement of function keys that usually appear above the QWERTY pad. Keep in mind, however, that if you have an Apple computer, you will likely not see or use these keys at any point.

The arrow keys are found on both Windows and Apple computers and usually appear at the lower right side of the QWERTY pad.

Apple computers have gained a reputation for endlessly reinventing the mechanism sitting underneath a key that allows it to be pressed without taking up a large amount of space. These parts of keyboard technology can vary greatly depending upon the specific keyboard manufacturer and the type of computer they are found on. For example, keyboard parts found on laptops are, by necessity, smaller and more compact than those found on desktop machines.

Underneath the key itself is an internal processor that translates the depression of a keyboard key into an electrical signal. This is made possible with delicate, tiny plungers that connect an electrical pathway when they are engaged by a keystroke.

An embedded keyboard, such as that found on the newer Apple MacBook Pro models, features keys that are almost flush with the body of the machine itself. No matter how the parts and function of keyboard hardware are envisioned, they must always allow for rapid response and sensitivity.

Different Parts of a Computer Keyboard

How to Program a Lenovo Keyboard

How to Test a Laptop Keyboard

How to Use HP Laptop Function Keys