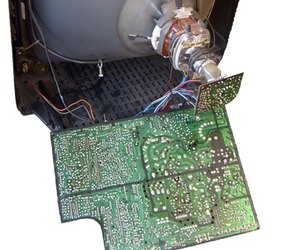 CRT televisions are cheaper than LCD televisions, but are difficult to find in mint condition.

Cathode-ray tube (CRT) TV sets project an image by taking an incoming signal and splitting its audio and video components. The video is taken through an electron beam and into a single cathode ray tube, illuminating phosphors inside the TV screen. This creates an image made of red, green and blue lights. The audio component is taken through an audio circuit and output to a loudspeaker.

Liquid crystal display (LCD) televisions, on the other hand, function by shining light through a thin layer of liquid crystals. These liquid crystals bend the light, enabling them to respond to electric current to determine what color filter to illuminate. Color filters are found in every pixel, capable of producing red, blue or green light.

LCD televisions offer a crisper image than their CRT counterparts due to the versatility of each pixel. CRTs create an image by blurring pixels that can be green, blue or red exclusively, whereas LCD images are clearer due to the pixels' ability to be any of those colors. Images are also brighter on an LCD, allowing for twice the amount of brightness a CRT provides. LCD television brightness also allow viewers to see images uninterrupted by sunlight or strong artificial lighting. In addition, the ability to see images without general blurriness reduces eyestrain for viewers.

Unfortunately, the LCD television's visual performance over time can be affected by dead pixels. Dead pixels no longer function and have burned out due to the amount of strain they have incurred. Users, however, can obtain a television replacement if the device is still within warranty. Otherwise, users will need to seek out repair options.

CRT televisions require an ample amount of space to accommodate their main components, contributing to their bulky and heavy design. Consequently, newer televisions will not be bigger than 36 inches in screen size. In contrast, LCD televisions are designed to be compact, usually measuring less than 10 inches in depth. This allows LCDs to weigh almost less than half the average CRT. Fifteen-inch LCD televisions can weigh between six and eight pounds.

LCD televisions consume almost half the amount of power CRT televisions require and emit less electromagnetic radiation. A 15-inch LCD television, for example, will consume 25 watts, as opposed to a 17-inch CRT that consumes 80 watts. The conversion difference remains the same in standby mode; CRTs consume five watts in standby mode, whereas LCDs consume three watts. The vast differences between LCDs and CRTs have prompted Japan to replace as many CRTs as possible with LCDs to save 3 billion kWh of power consumption.

Of course, the bigger the television, the more power it will consume regardless of its type. A 32-inch LCD television will require half the power of what a 52-inch LCD needs. This is a worthwhile consideration for individuals seeking to replace a CRT television with an exceptionally large screen LCD television.

Life Expectancy of a LCD HDTV

Around The Home
Entertainment
By: DerekKing

Around The Home
Entertainment
By: Gissimee Doe

Around The Home
Entertainment
By: CharlesW

How to Reset the Lamp Hours on a Toshiba DLP

Around The Home
Entertainment
By: Blaze Johnson