Differences Between Psuedocode and Flowcharts

Flowcharts and pseudocode provide ways for computer programmers and others working on a project to have an upper-level understanding of both the entire project and any algorithms involved in it. Both flowcharts and pseudocode have benefits in describing the logic of the algorithms and can be used at different points in the programming process. However, either of these methods of planning for a project can save time and ensure everyone is on the same page. 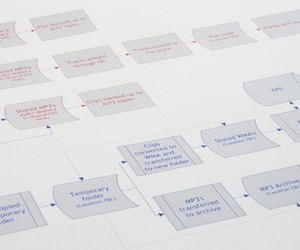 A flowchart can illustrate the processes of a software program.

The layout of flowcharts for a program provides a graphical structure that allows programmers to follow the logical structure of the code. The graphical nature of the flowchart provides another way to look at the sequence of the program, which can be especially beneficial for nonprogramming members of the team who need to understand how the code will work. The layout of pseudocode follows more closely the structure for the code of the program. Pseudocode uses words as opposed to a pictorial representation to illustrate the logic of the algorithm.

Flowcharts are especially beneficial for smaller concepts and problems, while pseudocode is more efficient for larger programming problems. Flowcharts provide an easy method of communication about the logic and offer a good starting point for the project because they are easier to create than pseudocode in the beginning stages. Pseudocode provides a beneficial bridge to the project code because it closely follows the logic that the code will. Pseudocode also helps programmers share ideas without spending too much time creating code, and it provides a structure that is not dependent on any one programming language.

The structure of pseudocode uses a linear text-based structure to organize the logic of the programming problem. It does not need so much detail as to include variables and function names but should include enough detail so that code can be created to follow the same logic. The structure of flowcharts uses symbols and shapes to create a diagram of only the essential parts of the algorithm or problem. While it is sometime not enough to begin coding from, especially for larger systems, it can provide a broad idea of how the system will function.

Both pseudocode and flowcharts can be either broad and cover only basic concepts of the algorithm or project, or they can cover more detail, making the jump to creating the codes easier. However, pseudocode has more flexibility with detail; too much detail in a flowchart can cause confusion.

The Advantages of Modularization in Programming

The Disadvantages of UML

Around The Home
Productivity
By: Jay Darrington

How to Storyboard Your Web Site

The Advantages of Using Pseudocode

Difference Between a Deliverable & a Milestone in an IT Project

Around The Home
Productivity
By: Suqing Wang