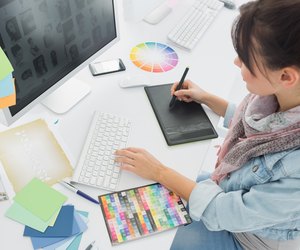 Use a graphics tablet to paint in a raster graphics editor or sculpt in a 3-D modeling application.
credit: Wavebreakmedia Ltd/Wavebreak Media/Getty Images

Most digital art at some point takes the form of a raster image, which is simply any image composed of pixels rather than vectors or vertices. The reason for this preference is that, unlike vectors, raster graphics support subtle color gradations, and unlike 3-D art composed of vertices, raster images don't require powerful graphics hardware and extensive processing. Raster graphics editors include photo editors, such as Photoshop and Gimp, as well as painting and cartooning software, such as Paint Tool SAI and Autodesk Sketchbook. While Adobe and Autodesk make professional-quality, proprietary software, Gimp offers a free feature set similar to Photoshop, and SAI provides an experience similar to Sketchbook for a much lower price. These programs are designed to work with a graphics tablet, which, unlike a mouse, controls the software with surface pressure as well as movement.

Drawing With Paths and Curves

Vector graphics editors, such as Adobe Illustrator, CorelDraw and Inkscape, store information as nodes and paths rather than pixels, and because an SVG image is defined by the relative distance between nodes, scaling it up or down produces no distortion or pixelation. Similarly, diagonal vectors never display aliasing -- jagged slanted lines -- the way raster images do. SVGs' scalable property makes them ideal for cutting signs from vinyl and other materials using die-cutting software such as Make the Cut and Sure Cuts a Lot. Their node- and path-editing tools make rendering smooth, precise curves with a mouse much easier than it is in a raster graphics editor.

The most complicated, resource-intensive graphics editors are 3-D animation programs, which combine modeling, animation and rendering tools in one package. Modeling and animating 3-D scenes takes a substantial amount of work, and skinning, shading and lighting typically take a similar amount. These applications handle each task with a separate tool set, processing a finished scene through a dedicated rendering engine, such as V-Ray, Mental Ray or Cycles, that simulates light rays reflecting off or passing through many types of surfaces. High-resolution animations require a network of rendering computers to perform many hundreds or thousands of processing hours.

Digital 2-D animation software, such as Toon Boom, Adobe Flash and Synfig, significantly reduces production time compared to a conventional, hand-painted workflow. Before 3-D rendering became affordable and prevalent, animation studios made 2-D films using traditional celluloid sheets and acrylic paint. Since the late 1990s, 2-D animation software has transformed frame-by-frame animation to a "tweening" process that requires an object to be drawn only once, then digitally animates it and adds perspective. The process is very different and much simpler than animating 3-D characters, although both types of animation use tweening to calculate motion between key frames.

What Is Rendering in Photoshop?

What Is Raster Animation in Computer Graphics?

How to Do Pixel Art With Paint

Around The Home
Productivity
By: Sean Hemmer

How to Edit Blue Ocean Water in a Beach Picture

Around The Home
Productivity
By: Karen S. Garvin

How to Shine a Light in Illustrator