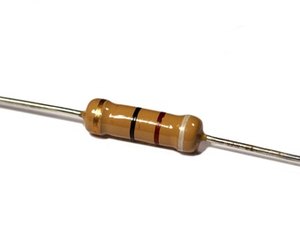 Resistors are used in computers and electronics.

A carbon resistor is the most common type. This is made by wrapping a carbon track around a ceramic core. The carbon track is wound around the ceramic core by a machine or etched into the core with a laser device. Two copper metal leads are then inserted in the ends of the resistor, so the ends of the track are touching the leads. The resistor is then painted to seal the core.

A metal film resistor is built in a very similar way. The core of this resistor is crafted from ceramic. This part, as in all resistors, is machine made. In a metal film resistor, the track is made from a metal oxide material. This has semi-conductive properties, similar to carbon. Again, copper leads are inserted into the ends of the resistor using a press machine. These resistors are also painted to finish the product.

Almost all resistors are manufactured by machine. The ceramic core is molded and pressed by machine. Individual cores are made to fit different sized resistors. The cores are then "wire wound" using another machine that wraps the resistor material around the core. The lead ends, which include both the metal wire and a cap end that is shaped like a bottle cap, are then pressed onto the core. The cores are painted with typical paint or a baked on finish.

The final step in making a resistor is applying the resistance values to the unit. This is done by painting lines along the painted core of the resistor. Each line has a particular numeric value, which relates to Ohms. For instance black is zero, brown is one, red is two and orange is three. The first two lines are simple numbers, the third is called the multiplier. A resistor with a brown band,red band and orange band therefore would equal 12,000 Ohms. The resistor therefore has a resistance value of 12,000 Ohms.

What Type of Material Is Used to Make a Memory Chip?

Around The Home
Productivity
By: Ashley Seehorn

How Does a Diamond Tester Work?

Around The Home
Entertainment
By: Deb Lindstrom

How to Know If Resistors Are Good or Bad

The Disadvantages of Compression Molding

Around The Home
Entertainment
By: Lewis R. Humphries

Around The Home
Entertainment
By: Kathryn Rateliff Barr