Binary code is often associated with a variety of technical applications, and rightfully so. In many ways, binary code is the DNA of modern computing, a language of 1s and 0s that was in existence well before computers came into being. Although binary code predates modern computing, it has become an integral element of the framework for much of the technology we use today. With that in mind, taking the time to properly understand how to interpret and "read" binary code instills not only an appreciation for general computer users but also a deeply powerful degree of control and comprehension for technology professionals. 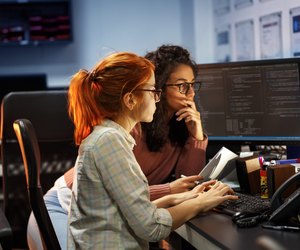 How Do I Read Binary Code?
credit: SolisImages/iStock/GettyImages

On a fundamental level, binary code is nothing more than series of 1s and 0s, each of which is arranged in a specific order to prompt computer hardware to engage in a desired action. From the perspective of the computer hardware, the 1 included in binary code represents on, while the 0 represents off. This does not mean to imply that 1s and 0s explicitly manage power functions within a device. Instead, these on and off signals can be interpreted by devices to achieve a wide range of results.

When reading and calculating binary code, the sequence of numbers displayed is read from right to left, as opposed to the more traditional left-to-right reading system. For each digit in a binary sequence, two values are possible, those being 1 and 0. As a result, binary is considered a base-2 system. In an eight-digit sequence, the digit to the farthest right is regarded as 2^0, the next digit as 2^1 and so on. If a 1 is present, this implies that this particular base-2 value is used, while if a 0 is found, that specific digit is not currently active.

As an example, consider the following binary sequence: 10011011.

Reading Binary and Other Functions

Although binary is a counting system, it finds its way into a variety of sophisticated systems. The American Standard Code for Information Interchange, also referred to as ASCII, converts binary code from an exclusively number-based system into one with letter characters as well. This allows binary code to become a core component of human and machine interaction. With 255 possible combinations of binary characters, the ASCII translation system includes exactly 255 letters and other commonly used symbols that can be derived from binary combinations. With the introduction of ASCII, the functionality and flexibility of binary sequences increased exponentially, creating a bridge between machine code and higher-level interfacing that allowed modern programming to flourish.

The Disadvantages of High-Level Programming Languages

The Advantages and Disadvantages of RISC

Around The Home
Productivity
By: John Lister

How Do I Convert Letters to Binary?