Apple has made a name for itself for especially responsive and quick devices. Even Apple devices, however, do occasionally freeze. In the case of an iPad running iOS 7, Apple recommends different steps depending on the problem, from forcing programs to stop to completely restoring the device in iTunes. Before you begin, make sure your iPad is charged. If none of the recommended troubleshooting steps work, contact Apple for specialized support. 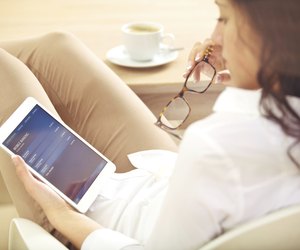 An iPad may freeze due to a program stall, operating system failure or hardware malfunction.
credit: Jacob Ammentorp Lund/iStock/Getty Images

If a single application is frozen but the system continues to respond to button presses, forcing the app to close could solve your problem with no data loss in other areas of the iPad. Double-click the "Home" button on the front of the device to go to the preview screen of all open apps. Swipe left or right until you see the app in question and then swipe up on the preview of the app to close it. This action forces the app to close while leaving all other applications and the operating system running.

If the iPad does not respond when you press the Home button, restart it by turning it off and then on. Do so by holding down the "Sleep/Wake" button on the top of the device until the slider appears on the screen. Place your finger on the power icon in the slider and slide it completely to the right to power off the iPad. After the screen turns off, hold down the "Sleep/Wake" button until it turns back on and you see the Apple logo. This option restarts the device's operating system.

If your iPad does not respond to holding down the Sleep/Wake button, you can reset the device by holding down both the "Sleep/Wake" and "Home" buttons simultaneously for approximately 10 seconds or until the system resets and you see the Apple logo. Resetting your iPad may cause you to lose data in active apps. Apple recommends you should only reset the device if it did not respond to the restart procedure.

As a last resort that causes you to lose any data not saved on a previous iTunes or iCloud backup, you can restore the iPad using iTunes on a computer. This option wipes the iPad clean and returns it to factory condition. Plug in the iPad to a computer with a USB cable and launch iTunes if it does not open automatically. Click on the "Restore" button in the summary pane that appears when iTunes recognizes the device. If iTunes does not recognize the device, unplug it and turn it off. Plug the USB cable into the computer only and hold down the "Home" button on the iPad as you connect the other end of the cable to the iPad. Release the "Home" button when you see an iTunes logo on your iPad screen. ITunes launches with a message saying it has detected an iPad in recovery mode, and then it prompts you to restore the device.

How to reboot iPhone if pressing power+home buttons failed

How Do I Turn Off an iPad?

I Forgot My iPad Passcode

Around The Home
Productivity
By: SashaMaggio

How to Close Your Apps on iPad