Stylus pens are devices designed for use with touch screens. These pens allow users to "write" on the touch screen much as they would a pad of paper, allowing input of handwriting, drawings and other gestures. Early portable devices often required a stylus for input, although modern capacitive touch screens have largely replaced these devices. However, there are still a few applications where stylus pens remain popular input methods. 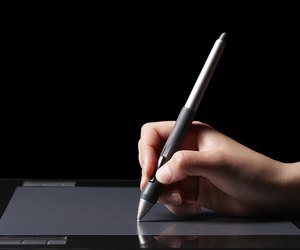 One of the earliest touch screen technologies was the resistive touch screen, consisting of two conductive layers sandwiched inside the surface of the screen. When you press down on a resistive touch screen, the two layers come in contact, completing a circuit and telling the device where the touch occurred. Early touch screens required some considerable force to create this connection, and the pen stylus was a common peripheral used to help supply that force and maintain touch accuracy. In truth, any object could serve as a resistive touch stylus, since the only requirement was physical pressure.

Capacitive touch screens use variations in an electrical field instead of physical pressure to register a contact. When you touch a capacitive screen with your finger, it alters the electrical properties of the charged screen in that spot, registering your touch. Styluses are still usable on capacitive screens, but they must be made of a conductive material to transmit the electrical field necessary to register the contact. Commercial capacitive touch screens, such as those used in payment terminals, often include a stylus attached to the device by a conductive wire in order to maintain the necessary electrical field.

While most users simply use bare fingers to manipulate their touch screens, styluses do offer a few advantages. Since mobile device screens can be very small, a narrow stylus can help pick out letters in the onscreen keyboard while minimizing typos. Drawing with a stylus can feel more natural than drawing with a fingertip, since the stylus mimics the natural hand position used with a pen or pencil. A stylus can also make handwriting feel more natural and increase legibility in systems that require users to sign, such as credit card payment terminals.

One area where stylus pens still reign supreme is in the world of digital tablets. These devices allow digital artists to write and draw as naturally as they would with a pen or paintbrush, and often contain many features designed to enhance their virtual art. In these devices, the tablet surface sends out an electrical charge, which reacts with a coil and chip inside the pen. The chip sends out a signal that identifies its position on the tablet, allowing the device to locate a touch accurately several times per second.

What Is a Digitizer?

How Does a Touch Screen Work?

The Differences Between a Stylus & a Digital Pen

Around The Home
Productivity
By: Brad Harris

How Does the Stylus for an iPad Work?

What Is a Touch-Screen Digitizer?