How Does a Surveillance Camera Work?

A surveillance camera can be placed in strategic locations throughout a home or business, and depending on its size, can remain anonymous. Mountable surveillance cameras can be placed in ceilings and on walls, while stand-alones offer more flexibility and can rest on shelves or even bookcases. Ideally, several surveillance cameras, placed independently in various locations, can work together to capture video. Connected to a central system, the surveillance cameras send footage back to a monitor that displays what the cameras see. Unlike traditional television broadcasting, CCTV sends a closed signal to the receiving monitor, allowing viewing to be strictly observed by the connected equipment, only. Surveillance cameras are capable of wide range viewing, so placing them in a corner area of the room will enable them to view a good portion of the room that is unobstructed. Picture quality has become quite impressive, with the monitors receiving video in high resolution, from the surveillance camera's eye. VCR's can also be connected to permanently record the transmitted material for future reference. Commonly, coaxial cable ties all of the relevant hardware together, but higher-end systems have incorporated wireless technology that eliminates the need to hide or bury wiring in walls, floors, and ceilings. 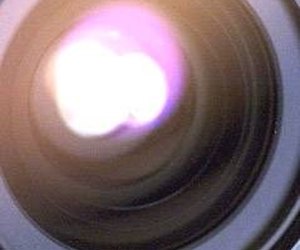 How Does a Surveillance Camera Work?

So, How Does it Work?

Where Can I Get One?

While surveillance camera equipment is readily available for purchase online and in electronic stores, those that are unfamiliar with the technology may find it burdensome and difficult to install. Alarm companies that offer home monitoring systems have recognized a need for video surveillance in the home and have risen to the occasion. Most of these companies will provide surveillance camera equipment, and monitoring for a fee that involves installation and an explanation of how the system works.

But for those that would prefer a quick and easy solution to video surveillance, and are looking to simply get a bird's eye view of what is happening inside a particular room of their home, a webcam may suffice. Easily connected to a home computer, a video webcam can take on the role of a surveillance camera and record footage directly onto the computer's hard drive, with the help of a simple software program.

Some Words of Caution

Owning a surveillance camera opens the user up to issues that may interfere with another individual's right to privacy. And while owning surveillance camera has its benefits, those who utilize one without the best intentions in mind cause society to cast a dark shadow over the ones who do. It is your right to obtain a surveillance camera to monitor activity on your premises, but it is also a good idea to make others aware that you are watching them. Although this may seem as if it defeats the purpose, it can be a deterrent. Of course, there are exceptions to every rule, but It is less likely that a person will commit a criminal act if she knows she is being watched.

Around The Home
Entertainment
By: Jonathan McLelland

How to Make a Spy Cam from a Digital Camera

Around The Home
Entertainment
By: Eric Sievers

How to Tell If a Smoke Detector Is a Hidden Camera

How to Use Webcams With WebEx

Around The Home
Productivity
By: Jane Buchanan

How to Hide a Spy Camera in Car

Around The Home
Entertainment
By: Lauren Vork

The Pros & Cons of Surveillance Cameras

Around The Home
Entertainment
By: Neal Litherland