How to Change the Time on a Casio G-Shock Watch

Casio's rugged G-Shock watches are built around the simple idea that a watch should survive for years, no matter what. The series launched in 1983, and Casio sold its 100 millionth by 2017, so clearly many customers agreed. Most G-Shocks use buttons for time setting, like other watches, but some models offer simpler options. 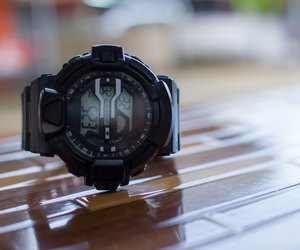 G-Shock watches have four or five buttons that control their functions.
credit: DroneStudio/iStock/GettyImages

Begin in standard or "timekeeping" mode. To enter time-setting mode, find the A button at the top left of the dial and hold it down for a few seconds.

On many models, the message ADJ appears and then changes to SET when you let go of the button. Current models of G-shock change the time zone automatically, so the first thing you are prompted to do is choose a city code for where you live or at least for a city in the same time zone. Use the right-side top and bottom buttons to move east or west until you find the correct city and then press the lower-left button to select it and move on to the next setting.

You are asked to indicate whether it's daylight saving time currently and then are cycled through choosing a 12-hour or military-style 24-hour display format, and setting the time, date, month and day of the week. After you've chosen all the appropriate settings, press the A button to return to normal timekeeping mode. Some models break home-city selection and time-setting into different sequences with slight variations in the screen messages and button presses.

Some G-Shock models are capable of keeping themselves updated. Models with what Casio calls "atomic timekeeping" receive a radio signal from one of six atomic clocks located around the world. To give the watch an opportunity to set itself, take it off and leave it in a windowsill in an area that's free of indoor or outdoor obstructions or any equipment that generates electric signals.

Ideally, it should find a signal and self-set in 12 minutes or less, but leaving it overnight is even better. Don't use the watch while it's listening for a signal.

Setting Time Through Your Phone

If you have a Bluetooth-enabled G-Shock, you can pair it with a smartphone and use Casio's G-Shock Connected app or the older G-Shock+ app. Both are available for Android and iOS.

For the Connected app, make sure the phone's Bluetooth is turned on and then place it within three feet of the watch. Tap the Connected icon to launch the app. While the second hand is pointed away from the Bluetooth logo on the watch face, press and hold the lower-left button for about 4 seconds. The second hand will point to the Bluetooth logo, showing a connection. Whenever you pair the phone and the watch, the G-Shock checks the phone's system time and updates accordingly.

For older models using the G-Shock+ app, tap to start the app and then tap the Discover G-Shock button on the screen. Hold down the pairing button on your watch – top left or bottom right, depending on the model – until the watch's model number appears on your phone screen. Tap the model number, and a passkey number appears on the watch. Enter it on the app to complete the pairing process.

Around The Home
Entertainment
By: demand1181

How to Set the Clock on the iHome

Around The Home
Entertainment
By: KyleF

Around The Home
Entertainment
By: Madison Rayne

How to Make a Casio Watch Stop Beeping Every Hour

Around The Home
Entertainment
By: Nicholas Smith

How to Set a Timex Alarm

Around The Home
Entertainment
By: Jeffrey Brian Airman