How to Check If Ethernet Cable Is Faulty?

There are three primary types of network cable issues: connectivity issues, performance issues and continuity issues. If your network connection has stopped working and you believe it may be caused by a faulty cable that connects you to an Ethernet network, there are three basic tests you can perform to see if the cable is the problem. 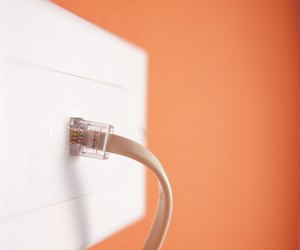 Connectivity issues are usually caused by a fault in a cable or its connections at either end. A quick test to check the connectivity is to plug the suspected cable into the network connector of another computer or network device. Typically, the jack you plug the cable into is part of a network adapter, which provides the interface between a computer or device and the network cable.

Network adapters typically have one or two LED lights that display that an established connection exists and transmission activity is occurring on the line. A network connection is indicated by the network adapter's Link LED. After plugging the cable into the network adapter, the Link LED should come on or start flashing to indicate a connection was made. If the LED doesn't light up or flash, there is likely a problem with the cable or its connector, or both.

If you have a performance issue, your network connection is failing intermittently or is transmitting data at much slower speeds. Performance issues are typically caused by a damaged or bent cable. While you can usually straighten a bent cable to solve the problem, you may need to replace a damaged cable.

To troubleshoot a performance issue, visually scan the length of the cable and look for any sharp bends, kinks or other physical faults in the cable. On many cable installations, like those where the cable is installed inside of a wall, you may need to seek additional help. However, if you find a sharp bend or kink in the cable, straighten the cable and check to see if the problem is resolved.

Before simply replacing the cable, shake the cable lightly at the connector side-to-side to see if the connection can be reestablished. If so, the problem is in the connector, which means you should repair or replace the entire cable. If both of these tests fail to correct the issue, your best bet is to replace the cable with one you know is good.

In addition to faulty connectors and bends in a cable, continuity issues can also be caused by a cut or sliced cable, a foreign object -- like a nail, staple or screw -- penetrating the cable, strong electromagnetic interference, or EMI, or any other physical damage or interference. If a visual scan of a cable's length is possible, check for any of these causes. If the cable cannot be visually checked, test it with a continuity tester, an electronic device made especially for this purpose. If the problem is EMI -- or its cousin radio frequency interference, or RFI -- the continuity tester should identify it as low continuity.

If the Problem Persists

If you've replaced the network cable and this failed to resolve the problem, it is likely that the issues are with local network configuration, one or more of the network connectivity devices -- such as the adapter, switches, routers and so on -- or a network server's operating system. A fault at these levels requires a higher-level of troubleshooting.

How to Use a DataShark RJ45 Network Tester Kit

Around The Home
Productivity
By: Ben Brassart

How to Make a Homemade Network Cable Tester

How to Check if a Co-Axial Outlet Is Working

How to Run HDMI Cables Without Interference

Around The Home
Entertainment
By: Ken Burnside