How to Insert Pictures Into Adobe Photoshop

Adobe Photoshop is the perfect tool for inserting one photo into another without making the final result look, well, photoshopped. The process essentially involves removing the background from one photo and then inserting the photo into another. Selecting photos that use similar lighting and camera angles is vital if you want the result to look realistic. 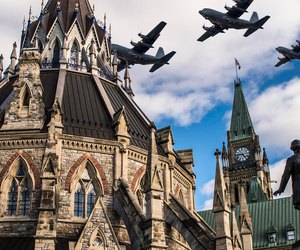 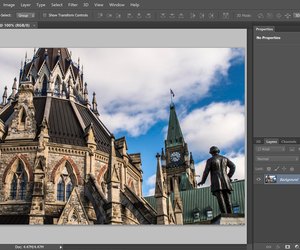 Open the image that will serve as the background.
credit: Screenshot courtesy of Adobe.

Open the photo that will serve as the background, which we'll refer to as the primary image. Decide where you want to insert a second image. Take into consideration the lighting and camera angle. In our example, the sky on the right makes a good place to add two or three airplanes. Because the camera is pointing upward and the sun is behind the camera, an inserted photo should show the bottom of the airplane where the sun is also behind the camera. 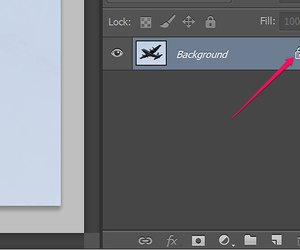 Open a second photo in Photoshop. Click the Lock icon on its layer in the Layer panel to unlock transparency. Now when you delete the background, deleted pixels won't be replaced with a solid color. You can use the Eraser Tool from the Toolbox to remove the background, or circle the background with one of the Lasso Tools and then delete it. When the background is a different color than the object in the foreground, the Color Range selection is the most effective.

If you want to make a , deleting the background may not be necessary. 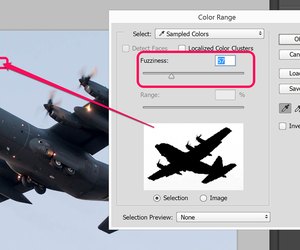 Click the background color to select it.
credit: Screenshot courtesy of Adobe. 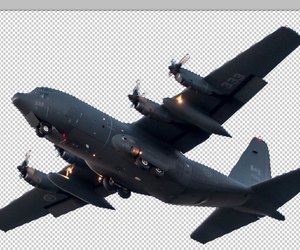 Press Delete to remove the selected background. Clean up any areas that weren't cut using the Eraser Tool. Remember to zoom in when you delete around the edges of the object you are keeping. Press Ctrl-A and Ctrl-C to select and copy the image. 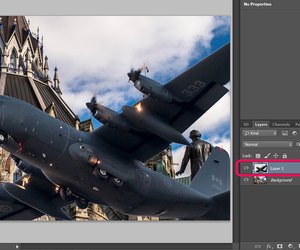 Paste the copied image into the primary photo.
credit: Image courtesy of Adobe

Advanced users should note that there are other ways to insert images into Photoshop, including . 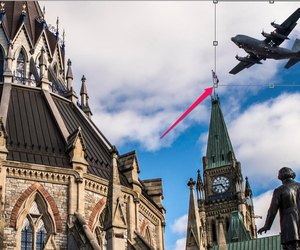 Select Free Transform from the Edit menu. While holding down the Shift key, drag a corner to resize the image as needed. To rotate the image, hover the cursor outside a corner until the cursor changes to a round double-ended arrow and then drag it as needed. Press Enter to save the changes and then drag the image to where you want it to appear. 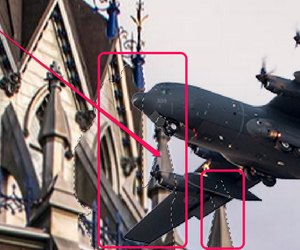 Bring details from the primary image into the foreground if needed. In our example, we want the airplane to be partially covered by the building to make the effect look realistic. To do this, select the Background layer in the Layers panel. Click the Quick Selection Tool in the Toolbox. Drag the cursor over the area where the inserted photo overlaps. Press Ctrl-C and Ctrl-V to copy and paste the selection in a new layer. 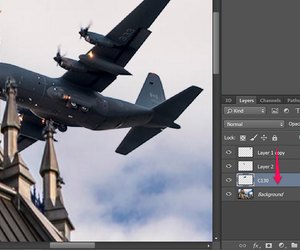 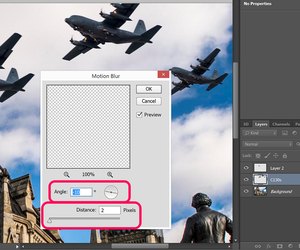 A small amount of motion blur is added to the airplanes.
credit: Screenshot courtesy of Adobe.

In our example, we copied and pasted two more copies of the same plane to make them appear like they are flying in formation and then added a small amount of motion blur. To add motion blur, select Blur from the Filters menu and click Motion Blur. Change the angle by dragging the Compass so that it's in line with the motion of the object.

How to Change a Background in Photoshop

How Do I Bend or Curve an Image in Photoshop?

How to Clean Up Pixels From a Blurred Picture

Around The Home
Productivity
By: Sarka-Jonae Miller

How to Fix Closed Eyes in Photoshop

How to Merge Two Photos in Microsoft Paint

How to Remove Motion Blur With Photoshop