How to Remove iPhone Apps From Phone Applications Library

When you've had enough of an iPhone app or game, delete it to free up space in your phone's memory for the next app you want to try. There are a few ways to remove apps from your iPhone and one way to delete them from your computer's iTunes app library.

To delete apps on your iPhone, tap and hold an app icon for a couple of seconds until all the icons begin to shake. Tap the X icon on each app you want to remove and confirm the deletion in the pop-up screen that appears. If an app doesn't have the X icon, the app came with iOS, and you can't remove it. After you delete all the apps you want to remove, press the Home button to stop the shaking. 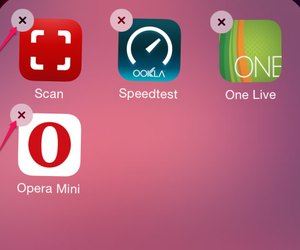 Remove apps on your home screen or inside folders.
credit: Image courtesy of Apple

This method removes apps from your phone, but if the app is also in your computer's iTunes app library, it won't erase it from your computer. The app will still sync with other iOS devices, and you can resync it to the iPhone from iTunes later. 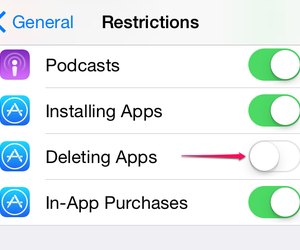 An off switch in Restrictions indicates an active Restriction. Flip this switch on to remove restrictions.
credit: Image courtesy of Apple

An alternate method uses iTunes to remove apps from your phone. Plug in your phone to your computer, click the iPhone icon in iTunes 12 and open the Apps tab. Click Remove by each app in the list that you want to remove from your phone and then click Apply to sync. 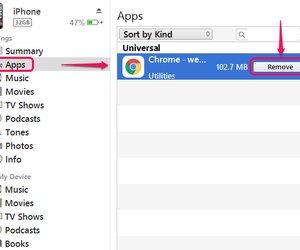 Changes only take effect after a sync.
credit: Image courtesy of Apple

If you like the convenience of using iTunes to remove apps but prefer the iPhone interface to the app list, use the home screen images on the Apps tab. Double-click a home screen page or folder page to open it, mouse over an app and click the X on its corner. 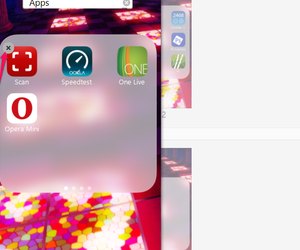 Drag apps or pages in this interface to rearrange them on the phone.
credit: Image courtesy of Apple

Removing apps from your phone doesn't delete them in iTunes. If you don't think you'll want to use the app again on any iOS device, delete it from your iTunes library to recover drive space on your computer. Open the Apps tab in your library, right-click an app and choose Delete or select the app and press the Del key. When prompted, choose Move to Recycle Bin to erase the app and recover space. How Can I Sync iTunes With My Android Phone?

How to Fix Apps That Will Not Open on an iPhone

How to Hide iPhone Apps

How to Get Apps Back on an iPhone

How to Cancel an App on the iPhone