How to Run EXE Files in DOS

Windows 8.1 includes a DOS prompt for modern command-line programs, but most vintage EXE files are incompatible with Windows and require a DOS emulator to recreate the early x86 environment. The same commands work in DOS as in the Windows command prompt, but you must mount a Windows directory in DOS to access files on your hard drive. 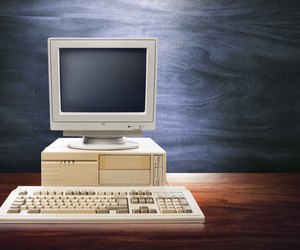 DOS emulators provide graphics and sound for i386 software too old to run in Windows.
credit: fergregory/iStock/Getty Images

When you mount one file system in another, the directory you mount is called the mount point and acts as the mounted file system's root directory, i.e., you can't access its parent. To access all your DOS programs from an emulator, put their folders in one common folder and then mount it as the DOS root directory. Because DOS doesn't have a mount command, the process depends on your emulator; usually, passing the directory name as an argument to the emulator when you start DOS mounts it as the C: drive. For example, entering the following command at the Windows prompt starts the DOSBox emulator and mounts your Games directory:

DOS commands are case-insensitive, including file and folder names, of which DOS displays only the first eight characters. Enter "dir" (without quotes, here and throughout) to view the files and folders in the current directory or "cd" followed by a folder name to change to that directory. After typing the first several characters in a file or folder name, press "Tab" to automatically complete the name. For example, in a folder containing the files Border.inf, Borland.exe and Born.com, type "borl" and press "Tab" to complete the file name Borland.exe. To run the EXE file, simply type its name and press "Enter." Type "help" for a short list of DOS commands or "help \all" for a longer list. Many DOS program folders contain a BAT file that configures DOS before running an EXE file. As with an EXE file, run a BAT file by entering its name at the prompt.

How to Add BIOS Files to MAME

How to Delete a File at the Command Prompt

How to Change Your Local Host Name

How to Run EXE Files in Cmd

How Can I Read a DMP File?

Around The Home
Productivity
By: Michael G. Sanchez

How to Install a BIN File in Ubuntu Linux