How to Test the Sound in Your Computer

With the astonishing array of multimedia applications in existence, audio playback has become an integral element of modern computing. Whether you're speaking with someone over a video chat program or are streaming your favorite TV show, you'll require audio output on a nearly daily basis with your device. When you buy a new computer or used hardware, you should test the audio output and input for problems as soon as you can, which can be done without much difficulty. 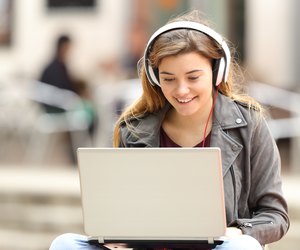 How to Test the Sound in Your Computer
credit: AntonioGuillem/iStock/GettyImages

The Basics of Computer Audio

In order for your computer to process and playback or receive audio signals, it requires an installed sound card. The sound card is responsible for virtually all of the sound-related processes that occur inside your computer. Without a sound card, the central processing unit (CPU) and motherboard would be unable to translate incoming signals into audible sound.

Sound cards are typically designed as either an independent card that is installed inside a computer or as an addition to the motherboard that's already attached to it. Laptops, for example, will typically have a motherboard-based sound card, while larger desktop computers may feature independent sound cards that can be replaced or modified as needed.

If you've installed an independent sound card in your computer, you may have noticed that the card itself has an integrated audio jack. You can typically plug speakers or headphones directly into this jack to receive audio output from your computer. With laptop computers, the integrated nature of the sound card and motherboard typically means that the audio jack can be located anywhere within the shell of the device.

When ready to begin the sound test, first determine whether you want to test audio input or output. To test output, you'll need a set of headphones or computer speakers and the appropriate connector. For the vast majority of sound cards, you'll connect your headphones or speakers using a 1/4-inch jack. If you've purchased consumer-level headphones or speakers, the chances are good that these devices will already feature a 1/4-inch jack. If not, you can purchase the appropriate cable and connector from virtually any electronics store.

Plug the speakers or headphones into the jack to begin testing audio output, then trigger audio playback on the computer itself with a song, video game or movie. Make sure the volume levels on your computer are set to a medium level before beginning. If you don't hear audio immediately, don't increase the computer volume. If, for example, there's a fault in your speakers or headphones and the sound suddenly turns on, excessively high volume levels could damage the speakers or your hearing.

If there's no audio output, make sure you haven't inadvertently muted audio output using a key on your keyboard or some similar control. If audio still doesn't play, check your system settings to ensure that the sound card installed in your computer has been designated as the primary audio device. If audio still doesn't play back, you may have a fundamental issue with your sound card.

Audio Input and Your Test

To test audio input on your computer, make sure your hardware either has a built-in microphone or that you provide your own external microphone. Connect it to your computer and open a program that uses audio input, such as Skype or a similar videoconferencing tool. These applications typically allow you to test audio input through the preferences or settings options. Access these menus and speak into your microphone. If you don't receive a signal, check your sound card to ensure that it's been designated as the primary audio input/output device. If your sound card isn't selected, you won't receive audio input.

About the Function of a Sound Card

How to Disable SPDIF

How to Change the Audio Output of a PC

How to Detect a Sound Blaster Card

How to Use a USB Audio Soundcard Adapter

Around The Home
Productivity
By: Robert Ceville

How to Fix a Sound Card

Around The Home
Productivity
By: Billy Kirk