How to Type an Underscore

Typing an underscore is an essential skill for a wide range of situations, and thankfully, it's an easy one to pick up. Underscores are often used in URLs and email addresses but rarely come up in ordinary text. There are a couple of different ways to type an underscore on a keyboard and on cellphones and other devices. You can also underline text in emails and word processing software. 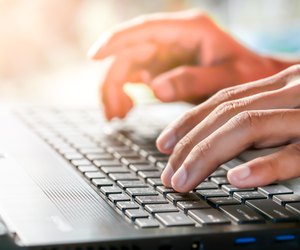 What Is an Underscore?

An underscore is the symbol "_" that looks like a long hyphen positioned at the bottom of the line. If you've wondered what the name of the symbol is, you have your answer: underscore. In most contexts, you won't encounter the symbol, but it comes up a lot when you deal with computer code and email addresses. You can underline text, but that is different from using an underscore as a character on its own.

You can type an underscore easily on both Mac and Windows computers. The underscore symbol shares a key with the hyphen symbol, and it's found to the right of the "0" key on the row above the letters. On Windows or Mac computers, press "Shift" and the "hyphen" key to type an underscore.

You can also use an alt code to type an underscore if you prefer. To do this, you must use a keyboard that has a number keypad with "Number Lock" activated. Hold down the "Alt" key and type "95" on the number pad for the underscore.

Underscore on iOS and Android Devices

Typing underscores on iPhones, iPads, and Android smart phones is easy, but not as easy as on a computer keyboard. For Android phones, bring up the keyboard and press the "?123" key to go to the symbols page. Tap the "underscore" key to type the symbol. It is located on the first page of symbols, so you don't have to do anything else. Tap "ABC" to go back to the ordinary keyboard.

If you want to underline a word in an email, you don't use the underscore. Most email services and word processing programs have a specific button for underlining text, which is a "U" with a line below it. Click this button and then type the word or highlight the text you want to have underlined and click the "U" with the line under it. You can sometimes do this by holding down "Ctrl" and pressing "U."

How to Make a Skull on a Keyboard Wingdings

How to Convert Voice to Text on an iPhone

Around The Home
Entertainment
By: Joshua Phillips

How to Type a Vertical Line on a Mac

How to Put Accents Over Words on a Cellphone

Around The Home
Entertainment
By: Anne Hirsh

How to Type a Smiley With a Mustache

Around The Home
Productivity
By: Richard Kalinowski