How to Use the Memory Keys on a Basic Calculator

Even very basic calculators have a set of keys to store a number in memory temporarily. Though not as full-featured as the ability to store values for variables on a graphing calculator, any calculator with memory buttons can keep one number saved for later use. On many calculators, you can also perform basic operations directly on the stored number. 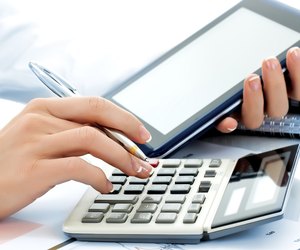 Most calculators have only a single memory slot.
credit: VikZa/iStock/Getty Images

The most basic memory function allows you to save a number temporarily. When you press "MS" -- short for Memory Store -- the calculator will save the number currently on the screen. This memory lasts while you perform other functions, and even if you press "C" or "Clear" to start a new calculation, but not if you turn off the machine entirely. Some calculators label this key "Min" (Memory Input) instead. If your calculator does not have either of these keys, press "M+" to store the value. To erase the memory without affecting the current calculation, press "MC" -- Memory Clear.

To display the number saved in memory, press "MR" -- Memory Recall. The calculator will show the stored number on screen, replacing any value already displayed. Some calculators have a key labelled "MRC." Pressing this button once recalls the number, and pressing it again clears the memory. After recalling a number, you can perform any regular operation on it. You can also recall a number mid-operation, such entering "2 + MR =." Note that until you store a new value, the memory continues to keep its original value even after recall.

You can perform simple operations on a stored number without recalling it by using the "M+" and "M-" keys. Press "M+" to add the displayed value to the existing number in memory. Press "M-" to subtract the displayed value from the number in memory. To subtract in the opposite direction, recall the memory first, subtract with the regular minus key and then store the result. You can also press "M-" without anything in memory to store the negative of the currently displayed number.

By pressing "MR" and then "M-" twice, you can switch the number in memory from positive to negative or vice versa. This works by displaying the stored number, subtracting it from memory once to make it equal zero, and then subtracting it again. Most calculators cannot perform more complex operations directly within memory. If you want to multiply or divide the saved number, you have to use "MR" to bring the number back onto the screen. For example, to halve the stored number, press "MR," divide by two and store the result.

The directions in this article apply to a wide range of calculators, including the calculator program included with Windows 7 and 8, but the button labels and their functionality may vary on some models.

How to Use Your Computer's Calculator

How to Clear Memory on a Ti-30XA

How to Use the TI 30X IIS Calculator

Around The Home
Productivity
By: Vera Leigh

How to Reset a Texas Instruments TI-82

Around The Home
Entertainment
By: TS Jordan

How to Set Up Speed Dialing on a Home Phone