The Polaroid PoGo printer is designed to let camera-phone and digital camera users print images while on-the-go. Even though the device connects to cellphones via a Bluetooth connection, it isn't compatible with Apple's Bluetooth-ready iPhone. Instead, to print an image stored on your iPhone using the Polaroid PoGo, you must transfer the image to the computer and then print the image using the computer's default image-viewer application. 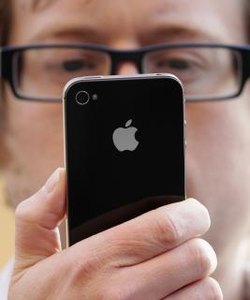 Before you can use any Bluetooth device with your computer, including the Polaroid PoGo printer, you must pair the two devices. Click the "Start" button in the computer's task bar and select the "Control Panel" option. Click the "Hardware and Sound" option, followed by the "Printers" option. Click the "Add a Printer" button. The computer will now search for the PoGo printer. Once the printer has been found, select the "Pair" option and enter the passcode "6000" to pair the two devices.

How to Add a Printer to an iPhone

How to Connect Pixma MP495 to Android Phone

How to Reverse Image Print on a Macbook Computer

Around The Home
Productivity
By: K.C. Winslow

How to Set Up Wireless Printers

How to Delete Photo Albums on an iPhone

How to Connect a Canon MP210 Wirelessly