My iPhone Displays Only the Apple Symbol

Each time you start your iPhone the white Apple logo appears. After several seconds of this you'll hear a couple beeps or vibrations, then your springboard will load. Once in a great while however, the iPhone may get stuck in a continuous loop where it never fully boots. This will cause your iPhone screen to continuously display the white Apple logo. But don't panic, this problem can be resolved. 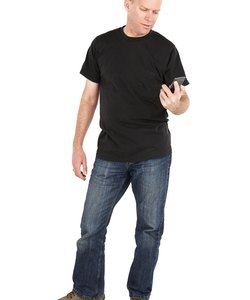 A bug occasionally causes the iPhone load screen to get stuck in a loop.
credit: Photos.com/PhotoObjects.net/Getty Images

Bricking is the term used to describe an electronic device that's broken down to the point of no repair. In other words, it's about as useful as a brick. When users see the iPhone that won't display anything other than the white Apple logo, they may think that the device is bricked. This is because no amount of turning the device on and off will help. Even if you do get the device to turn on and off, it won't progress past the point of displaying the Apple logo upon rebooting. But fear not -- your iPhone is not bricked, and it can actually be fixed relatively easily.

The reason your iPhone is displaying the Apple logo is because it received a bug. There's no one particular app that causes the problem. However, the bug usually occurs when installing a new app, or when updating your firmware. It has been known to occur on jailbroken iPhones, as well as standard iPhones, but it's unknown as to whether the bug is caused by iTunes or the iPhone itself.

The way to fix the "iPhone Stuck on Apple Logo" bug is by restoring the iPhone's factory settings. To do this you must first turn off your iPhone, then connect it to your computer via the USB cable that came with the device. Launch iTunes on your computer. Hold down the "sleep/wake" button (top) and the "home" button (circle) at the same time. Continue to hold them for 10 seconds. Release the "sleep/wake" button, but continue to hold the "home" button until you see a message appear on your iTunes screen notifying you that your iPhone wants to go into recovery mode. Click "OK," then click the "Restore" button in iTunes. Your iPhone will be reset to its factory settings, and you'll be able to use it again when iTunes is finished installing the firmware. If recovery mode doesn't work on your first attempt, don't panic. You may need to try it several times before it works.

Because this bug occurs most often when installing new applications or when jailbreaking your iPhone, it's best to use extra caution when executing these processes. When jailbreaking your phone for instance, use only proven methods that have been time tested. It's tempting to use the newest, easiest jailbreak method, but these can cause the bug to occur. Apple even recommends that you refrain from jailbreaking your phone at all. While jailbreaking is considered legal, it does void your warranty, and if you get a more serious bug, Apple won't fix your iPhone. When downloading and installing applications over-the-air, refrain from using other applications. Allow the app to download and install completely before doing anything else with your iPhone. Another way to avoid problems is by updating your apps one at a time, rather than using the "Update All" option.

Why Is My iTunes Not Syncing With My iPhone?

How to Make the iPhone Vibrate When Typing Keys

Around The Home
Entertainment
By: Lynn Burbeck

What Do I Do if My iPhone Is Completely Black?

Around The Home
Entertainment
By: Amanda Gronot

How to Completely Reset an iPhone Without a Password

Around The Home
Entertainment
By: Emma Nichols