My TV Won't Turn On

Nothing lasts forever, but there's a particular sorrow to a television that won't power on. That large, flat screen just sits there, taking up prime real estate in the living room, den or bedroom, refusing to entertain or enlighten anyone. Some TV power problems, though, lend themselves to a fairly simple fix. With luck, you'll be back on the couch and watching your favorites in no time. 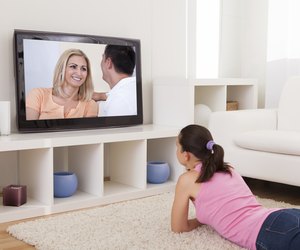 You can troubleshoot common TV power problems on your own.
credit: AndreyPopov/iStock/Getty Images

Go right to the power switch on your television and press it to see if the unit powers on. If it does, then the problem is your remote control, which may just need some fresh batteries.

By the way, you can test your remote by pointing it at the camera in your phone or computer and pressing the remote's power button. Your camera can see the remote's infrared signal, even though it's invisible to your eyes. If you see a small flash of light on the camera screen, the remote is working.

Visually follow the power cord from where it inserts into the television (usually in the back) to the power outlet in the wall. Make sure the cord is fully plugged in at all junctions. If possible, plug the television directly into a wall outlet, temporarily bypassing any extension cords or surge suppressors.

If you see damage to the cord, like badly frayed insulation or exposed wire, you have a dangerous situation that needs immediate attention. Unplug the cord and replace it. If you can't unplug the cord safely, due to damage at the plug, then turn off the power to the outlet by tripping the circuit breaker or have a professional take care of the problem (immediately!).

Your remote and your cords may be fine, but the problem could be the power outlet itself. Unplug the television and plug a lamp or another appliance into the same outlet to confirm that electricity is available. If not, check your circuit breakers or fuses to see if power has been interrupted. Plug the TV back into an outlet you know is working and turn it on; sometimes the act of disconnecting and reconnecting the power reboots the television and restores its function.

A TV is typically connected to several devices, such as a DVD player, cable box or a streaming media player. Check all these connections as well and determine whether the individual devices have power. If they do, then the problem is clearly with power delivery to the television itself or with the internal electronics of the TV.

Your television has fuses along its internal circuits as a safety measure. A blown fuse will interrupt power. Replacing a fuse generally involves removing the back of the television. It is a complex and potentially dangerous job best left to a professional TV repair person.

How to Turn the TV on Without a Remote

What Is the Problem if My TV Turns Itself Off?

How to Open a TV Remote Control

Around The Home
Entertainment
By: Charlotte Johnson