Electrical power comes in two distinct types, alternating current (AC) and direct current (DC). Electrical power works because electrons flow from atom to atom in many substances. Although a magnet field produces both kinds of power, in direct current the negative electrons are made to flow in a single direction. In alternating current, the negative electrons flow in both directions. In the United States, AC electricity changes directions 120 times per second. 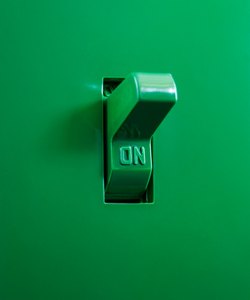 Your home runs on AC current because it is more efficiently transported over long distances.

AC and DC electricity are measured in volts. Voltage pushes the current from the source to the user, and you measure voltage in terms of the distance between two charged points. The voltage is based on the watt and the ampere and equals the amount of power required to move electrical current between two points. One volt equals one joule of energy per coulomb of charge.

Voltage is the field that attracts or repels negative and positive charges. You can see the field created by voltage when you pull an item out of the dryer that is statically charged. The fibers extend in the direction of the voltage field just as iron filings line up in the field over a magnet.

The amount of power needed to move the electrical current between two points divided by the charge magnitude equals the voltage of the current.

Volts multiplied by current equals power. You use watts to measure both AC and DC power, where one watt equals one joule per second.

Incandescent light bulbs and space heaters without fans will run on either kind of current. Some battery-powered appliances such as radios and CD and DVD players will run on batteries (DC power) and electricity from an outlet (AC power).

How Does an AC Adaptor Work?

Around The Home
Productivity
By: Ezmeralda Lee

Around The Home
Entertainment
By: Herbert Harris

Can a Magnet Drain a Cellphone Battery?

Around The Home
Entertainment
By: Amber Viescas