The Advantages of Higher Bandwidth Frequencies

From Michael Faraday and Guglielmo Marconi to Edwin Armstrong and beyond, radio technology continues to improve in the 21st century as consumer radio applications increasingly require more bandwidth. Broadcast radio, Wi-Fi devices and cellular phones are all radio devices. Choosing a radio-transmission frequency is not about a race to the top or bottom but rather about the selection of the optimal frequency for the job based on needs. As radio wave frequencies increase, they gain more bandwidth at the sacrifice of transmission distance. 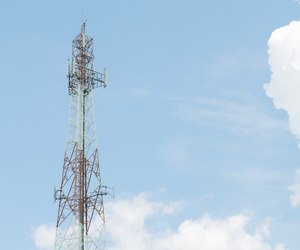 Higher-frequency transmissions have more bandwidth than lower-frequency transmissions, which means higher-frequency transmissions can send substantially more data between devices in less time. However, more bandwidth only matters if you need it. Real-time radio transmissions such as broadcast television programming or wireless phone call conversations only benefit from more bandwidth until the medium hits maximum quality. Any bandwidth over that required to deliver the maximum quality is left unused. Higher frequencies shine when used for computer networks and mobile Internet applications where the goal is to move large amounts of data quickly between devices. A 5 GHz Wi-Fi device is able to carry more data than 2.4 GHz Wi-Fi device. Additionally, radio devices like Radio-Frequency Identification transmitters for mobile tolling on highways benefit from high frequencies by being able to interface simultaneously with hundreds of nearby devices.

Leave Now and Beat the Crowd

Fewer devices operate in the high-frequency ranges, so the higher you go, the less likely you are to encounter interference from other devices. The high-frequency UHF broadcasting range is less crowded than the lower-frequency VHF band. Interference is undesirable because devices that broadcast on the same frequency can interrupt one another and confuse the receiving device. Higher-frequency devices are particularly advantageous for heavily populated cities and major industrial areas.

Increasing the frequency doesn't improve transmission quality in all areas: High-frequency transmission devices can't communicate from as great a distance as low-frequency devices. A 2.4 GHz Wi-Fi router can communicate with connected devices at a greater distance than a 5 GHz Wi-Fi router can reach, and devices that run in the even lower-frequency HF band can communicate as far as 1,800 miles apart. High-frequency broadcasts are less susceptible to interference from electronic sources, while low-frequency transmissions are less susceptible to interference from physical objects like walls that block communication.

Choosing the best frequency is important for broadcasting technologies like radio and television. Lower frequencies are better for broadcasting low-fidelity content like AM talk radio over long distances, whereas high frequencies are better for broadcasting digital HDTV broadcasts over short distances. AM radio waves can pull off an interesting trick called ionospheric refraction, in which radio waves bounce back to Earth instead of going out into space. Ionospheric refraction can cause stations that are thousands of miles apart to interfere with each other.

Around The Home
Entertainment
By: Dan Stone