The Functions of a Breadboard

A breadboard is a platform you can use to build and test electronic circuits, usually without having to do any soldering. Certain parts of the breadboard are wired together so that electricity can flow from component to component in orderly rows. Amateurs and experts alike use them to experiment with circuit ideas, and in some cases, they can be used to build useful devices directly on the breadboard. 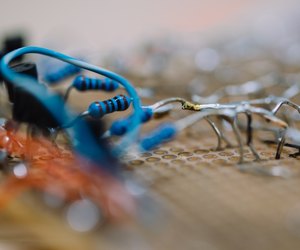 A breadboard is an inexpensive, easy-to-use piece of hardware for wiring electrical circuits. Breadboards acquired their name because they are similar in shape to cutting boards used for cutting unsliced bread. In the past, hobbyists and engineers nailed metal spikes into cutting boards when wiring circuits.

A breadboard is usually covered with holes lined with metal, in which wires and electrical components such as resistors, diodes and capacitors can be plugged. The holes are divided into rows, and holes within particular rows are wired together on the underside of the breadboard so that an electric current can flow down the rows.

It's easier and faster to work with breadboards to lay out circuits than it would be to try to wire components without one, so they're useful for quickly testing and prototyping electronics ideas. Breadboards can also be used without soldering, which makes it easy to remove components and reuse them when you're done with an experiment. If you're building a simple electronic project for home use, you may be able to leave it on the breadboard while it's in use, but a commercial project would need to be remade on a permanent platform.

If you don't have a breadboard or don't have the electrical components that you need, you can use a virtual breadboard program that allows you to build and test simulated circuits on a computer or smart phone. Some programs for this purpose include Fritzing and CircuitLab.

How to Remove Smoke Odor From Electronics

What is an HVAC Sequencer?

Around The Home
Entertainment
By: Ezmeralda Lee