Standard computer wallpaper sizes are always changing because they are relative to the current popular monitor resolutions. Ideally, a computer's wallpaper will share the same resolution as the screen, which provides the best possible picture quality while using the least amount of computer resources possible. The standard wallpaper sizes are determined by the most popular resolutions of the time. For example, most computer monitors ran the 1024x768 resolution for years until widescreen monitors grew in popularity, making 1366x768 the most popular resolution. 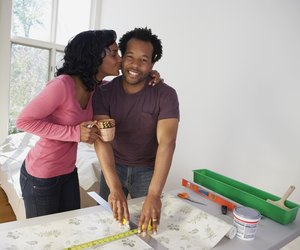 The Most Common Resolution

The 1920x1080 resolution is a popular choice for computer wallpaper because it is found in both computer monitors and HDTV sets. As of January 2014, 9 percent of computer users ran the 1920x1080 screen resolution, making it a close contender for the second most popular size. The 1920x1080 resolution is popular because it can scale down well for other screens that use the 16:9 aspect ratio, including the common monitor 1366x768 and 1600x900 WSXGA resolutions. Full HD-formatted wallpapers also scale down well for 1280x720 HD screens; however, the format is uncommon on monitors.

The 1920x1200 standard wallpaper size covers all the bases for screens running in a 16:10 aspect ratio. While 16:10 screens make up a large share of computer monitors, the devices are spread out between four different resolutions: 1920x1200, 1680x1050, 1440x900 and 1200x800. While 1200x800 is the most popular resolution within the group, it is also the lowest and the worst for scaling in the group. However, all four screen resolutions are considered standard wallpaper sizes.

The Last of the 4:3 Screens

The 1280x1024 and 1024x768 standard wallpaper sizes work well on screens running the 4:3 aspect ratio.While the 1024x768 resolution still held the second most popular ranking as of 2014, the standard is on a downward market share trend. Wallpapers designed for screens with 16:9 and 16:10 aspect ratios do not scale well on screens with 4:3 resolutions. However, 1280x1024 wallpapers scale down well for 1024x768 screens. Microsoft recommends developing for 1024x768 as a minimum accepted screen resolution.

How to Find Out What Size Your Computer Wallpaper Is

Around The Home
Productivity
By: Nicole Hamilton

How to Create Wallpaper for Various Displays

Around The Home
Productivity
By: Joe Rivers

Around The Home
Productivity
By: Brendan O'Brien

Around The Home
Entertainment
By: Emily Beach

How to Change Desktop Wallpaper for All Users

How to Fix an Upside Down Computer Screen