What do you do if Twitter suddenly won't let you tweet? There are a number of possible reasons that may interfere with Twitter use, including account suspension — in the event of rule violations, for example — hacking, or inappropriate use. The following tips and troubleshooting will help get you tweeting again. 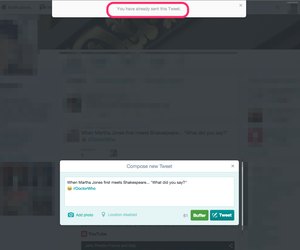 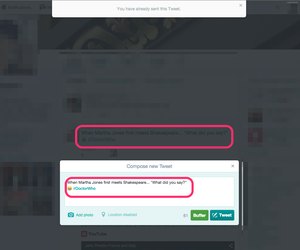 When you post a tweet on Twitter and the text matches one you previously posted, Twitter stops the tweet with an error message that typically says "Whoops, you already said that." Twitter tries to keep content fresh and reduce spam by ensuring that users create unique tweets. Review the text and revise it to create unique content. This error message most commonly occurs when your tweet matches a recent one you posted; publishing the same tweet once or twice a year is unlikely to cause an issue.

Does your tweet include a link? Twitter's system includes automations that reduce inappropriate or spam tweets. To keep the automations effective, Twitter uses a database of predetermined URLs or website links deemed unsafe. If you've tried to tweet a link that matches one in the database, the tweet will not post. Adding one of these links to your Twitter profile may also create problems when you go to access your account. Most of the links in the database are for spam, malware or phishing websites that can compromise other people's computers if they click the links. If you know for certain that you're linking to a safe website, you can complete a support ticket for support and request Twitter review the site.

Accessing Twitter from a mobile app can occasional prove problematic, especially if you're not using the official Twitter app. If you've been unable to tweet from your mobile device, access your Twitter account from a computer to make sure you have access. In some cases, third-party mobile apps don't update to meet changes with Twitter or other platforms. If the app you're using is no longer functioning, it's time to move on to another. Most mobile apps include a link to the developer's website where you can submit a request for help, send them an email, or access FAQs and troubleshooting information.

How to Fix Tumblr Spam

Around The Home
Entertainment
By: Josh Fredman

Around The Home
Entertainment
By: Jane Williams