Over 100 years have slipped by since Samuel F.B. Morse sent the first telegraph and Alexander Graham Bell made the first phone call. Radios have been around for a little over a hundred years, and it's been more than 80 years since the first TV broadcast. Fast forward to the 21st century, and the Internet is taking over the world. It makes information accessible quickly and easily in large cities, as well as remote locations. Today, devices such as computers, cell phones and tablets are the primary communication devices. 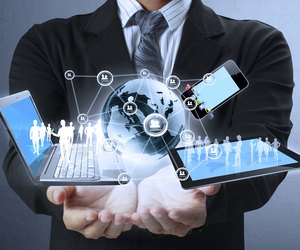 The overwhelming majority of today's communication devices are connected to the Internet.
credit: violetkaipa/iStock/Getty Images

It's been more than 300 years and many prototypes since the printing press sent the first telegraph. By the middle of the 19th century, telegraphy, with the help of oceanic telegraph, had spread around the world. Oceanic cables were put on the bottom of the oceans, connecting continents with each other. The convenience and immediacy of the telephone soon outpaced the telegraph, though. In the 21st century, telegraphs are rarely used. Western Union, the main company sending telegrams in the U.S., stopped sending telegrams in 2006. Conversely, the telephone remains ever popular. In 2011, 71 percent of American households still had landlines, according to the Wall Street Journal.

Early telephones weren't as reliable as they are today. If a cable got damaged, the line would be dead and there would be no communication at all. Thus, it was necessary to create something to improve and stabilize the stream of transmission. Guglielmo Marconi developed the first wireless radio-transmitting device as a communication piece for ships. Since then the radio has become a major source for communication. Television, which made its debut for moving pictures in 1926, very quickly became a primary communication source following the end of World War II in 1945. In 1948, less than one percent of American homes owned a TV set, but that increased to just over half by 1954 and ballooned to 83 percent by 1958.

Computers and the Internet

Computers and the Internet are inextricably connected. During the 1980s, the National Science Foundation funded the development of a network of computers for research. This project was called NSFNET. The NSF later handed NSFNET to a commercial consortium. Thus, NSFNET became the backbone of what is the Internet today. The Internet enables the rapid sharing of ideas and information across the globe. In 1965, Gordon Moore, the co-founder of Intel, predicted that computer processing power would double every two years. He expected his observation, which became known as Moore's Law, to hold for about 10 years. Almost 50 years later, Moore's Law holds true. Creation of numerous software applications and accessories brings new levels of communication to private households, businesses and government agencies.

The Internet in Your Pocket

Innovators have drastically reduced the power consumption of computer chips and managed to squeeze them into smaller and smaller devices. The size of these devices and technological inventions makes it easy for people to take their communication source with them wherever they go. Wireless Internet access allows people to get entertainment, news and information and communicate with each other at any time from almost anywhere on the planet. The smartphone is a ubiquitous communication device for young people; a Pew study in January 2014 found that 83 percent of Americans aged 18 to 29 owned one. Older Americans have been slower to adopt smartphone technology, though; according to the same study, only 19 percent of Americans aged 65 or older own a smartphone.

Around The Home
Productivity
By: Anthony Szpak

Facts About How the First Cell Phone Was Invented

Around The Home
Productivity
By: Alicia Rudnicki