What Are Infrared Cameras Used For?

Infrared cameras photograph heat rather than objects. The camera is a heat-sensor that registers different temperature levels and converts them into a film or video image. Most cameras use digital imaging, but some use chemical infrared film. Cameras range from simple point-and-shoot types to expensive models with detailed, higher-resolution imagery. 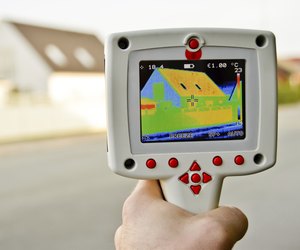 A thermal image can show where a building leaks heat.
credit: JimmiLarsen/iStock/Getty Images

The naked eye can't tell where heat is leaking through home insulation. Infrared imaging can capture the exact spots where, for example, weatherstripping around a door or window isn't doing its job. The higher the camera's resolution, the more precisely the camera can pinpoint the heat sources. Highly sophisticated cameras are good enough to allow a contractor to trace coolant leaking from an air-conditioning system. Top camera models can also transmit the information wirelessly.

Firefighters can use infrared cameras to identify where fires are burning out of sight -- inside a building or under a floor, for instance. When smoke is heavy, infrared systems can also locate people trapped by the fire. After chemical spills, the Environmental Protection Agency uses cameras to detect spills and leaks. Because chemicals have a different thermal signature than their surroundings, the camera can spot them when the unassisted eye wouldn't have a clue.

The military use infrared cameras because thermal imaging sees through many forms of camouflage. For example, an ambusher covered by dead leaves and twigs can fool the human eye, but the camera's going to show the difference from the surrounding area. Marijuana growing in cornfields registers a different color from corn on infrared cameras, allowing military drug-enforcement units to find the plants. "Multispectral" cameras can combine the infrared information with a conventional visual image to give users even more data.

Along with its practical applications, infrared photography has found a niche in the art world. By taking black and white photographs with an infrared camera, for instance, photographers change the contrasts in an image. Things that reflect infrared become whiter, while things that absorb it become darker. That creates a different look, and highlights different parts of the image than a traditional shot. Art photographers use infrared cameras as well as regular cameras with IR filters.

How to Fool Motion Detectors

How to Convert a Digital Camera for Thermal Imaging

How to Unblur Photos

How to Set Up a Video of You Drawing

How to Protect an Unopened Disposable Camera in a Terminal

Around The Home
Entertainment
By: Michael Davidson