What Are the Differences Between Following & Followers on Twitter?

Twitter may be a social network, but you'll be talking to yourself until you start building an audience. When you follow users, the information they share automatically comes in to your account; when people follow you, they see what you have to say. Although Twitter promotes two-way communication with its following and followers features, it doesn't force a connection between the two. For example, you can follow an account, but it doesn't have to follow you, and vice versa.

How Following and Followers Work

Following connects you to other people on Twitter, but it doesn't necessarily connect them back to you. When you follow someone, her account appears in your following list. You see her Tweets, Retweets and updates in your feed, and she can send you direct messages.

However, she won't see any of your Twitter activity in her account, unless she also follows you. When a user follows you, her username appears in your list of followers, adding to its total numbers. She'll receive your Tweets, Retweets and updates, and you can send direct messages to her.

How to View Your Following and Followers Lists 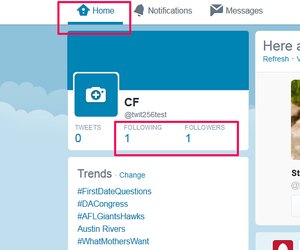 You can also see how many Tweets you've sent on your Home page.
credit: Image courtesy Twitter

The Following and Followers Ratio

There's no Twitter rule that says that users should follow people who follow them. Some people follow everyone who follows them; others are more selective. For example, you might well expect friends to connect with you, but you're unlikely to be followed back by celebrities or large businesses. They tend to build large following lists but to follow fewer users.

Having a lot of followers is not a problem; it's a sign that you're doing something right. However, following a lot of accounts without attracting your own followers maypresent a challenge. Some users use aggressive following tactics to build an unnatural influence on Twitter or to spam other accounts. These users typically have very few followers but follow a disproportionate number of people.

To avoid potential abuses of the system, Twitter only allows you to follow up to 2,000 users before it imposes a limit. When you hit that number, the site looks at your following/followers ratio. It doesn't say exactly how this assessment works and it doesn't publish acceptable or unacceptable ratios. If your numbers look natural, you may not have a problem. However, you may have to wait until you get more followers before you can follow new accounts again, or you may get a daily or a total following limit. In extreme cases, Twitter may suspend accounts if it suspects they're breaching the Twitter Rules.

How to Hide All Retweets

Around The Home
Entertainment
By: TravisG

How to Tell If Someone on Twitter Has Blocked You

How Do I Unblock Someone on Tumblr?