What Are the Different Kinds of Optical Drives?

Optical drives are disk-based drives in many devices, including computers, movie players and audio systems. Optical disks were introduced to the consumer market in the 1980s and rapidly evolved to store more capacity and facilitate faster read and write times. According to Optic Set, optical drives shine a focused laser light on the disk. The beam is then scattered, reflected and stored in a photo diode array. The drive uses this array to analyze, read and, with some drive types, write such data into disks as music, photos and videos. 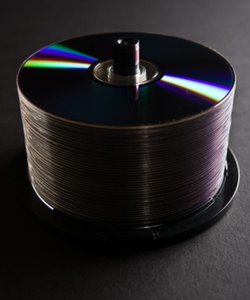 Compact Disk Read Only Memory drives were among the first disk-based drives for modern personal computers. CD-ROM drives populate disks with data using ISO 9660, the Compact Disk Filing System. This outlines the structure of saving and reading files from a compact disk, including the memory to be allotted separately for data and for system booting. Modern CD-ROM drives can achieve read speeds of 60 revolutions per second (60x); however, most CD-ROM drives in computers run at a slower speed to improve stability and reduce noise and will only speed up for larger data files and if the drive encounters read errors.

Digital Versatile Disk Read Only Memory drives are the direct evolution from CD-ROM drives. DVDs had greater capacity and performance than their CD counterparts while retaining the same physical dimensions. The DVD Forum is the organization that oversees the development of DVDs. The organization sets multiple standards for the construction and functionality of DVDs. It regularly publishes DVD books that are released to the public; however, certain DVD specifications are not yet publicly available and must be licensed from the forum for a nominal fee.

CD-ROMs, DVD-ROMs and Blu-ray drives come in rewritable drive types. RW drives have all the functionality of their read-only counterparts but can also write data on the disk. Write speeds are typically slower than read speeds to maintain stability; write processes are highly sensitive to shock and can corrupt the disk beyond repair when forcibly interrupted. While RW drives can write multiple times, writable disks come in one-time write (R) and multiple-time write (RW) variations.

What Is a Computer Optical Drive?

Around The Home
Productivity
By: Debopriya Bose

What Is a DVD Drive?

Around The Home
Productivity
By: David Hose

How to Format a DVD+R

How to Burn M2V to DVD