Computer systems have two main components: hardware and software. The physical parts of the computer, such as the tower, monitor and keyboard, are the hardware. The software consists of the code that controls the hardware and tells it what to do. Computers are general-purpose information machines that can perform a variety of tasks on data. These tasks are all related to the four basic computer operations: input, output, processing and storage. 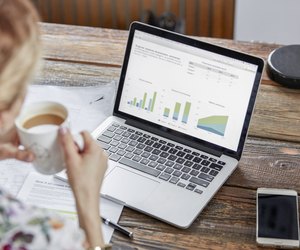 Input and Output Functions of a Computer

The input computer function accepts data from input devices and sends it to the computer processor, while the output function communicates the results of processing. A class of hardware devices known as peripherals are used to perform these functions. Common input peripherals include the keyboard, mouse, stylus and touchscreen. Digital cameras, microphones, scanners and joysticks can also be used to input information into a computer. Output peripherals include monitors, speakers and 2D and 3D printers.

Data processing is the most basic function of a computer. This function is performed by the central processing unit (CPU), which consists of electronic circuits that can read and execute code instructions to perform a wide range of tasks, from performing complex mathematical calculations to sorting the entries in a database. The CPU can be seen as the brain of the computer, accepting input data and instructions, executing commands, storing results in memory and sending data to output devices. It controls the sequence of operations and the use of data storage.

In addition to the CPU, some of the processing function of a computer may be performed by an arithmetic logic unit (ALU), which performs arithmetic and binary logic operations, or a graphics processing unit (GPU) that's responsible for creating graphical output that displays data in visual form. Gaming computers are heavily dependent on GPUs to generate complex dynamic graphics.

One of the most useful functions of a computer is data storage. Besides storing data that has been input through peripherals, computers also need a way to save the results of data processing. All this is accomplished through peripheral storage devices, which may be internal or external. Internal storage includes RAM (random access memory), which is used during processing and temporary in nature. Information stored in RAM memory is not retained if the computer is turned off. Persistent, long-lasting data storage is provided by external devices like CDs, DVDs, hard drives and flash drives.

Around The Home
Productivity
By: Jensen Johansson