What Chemicals Are Used to Develop Film?

While photography is a mainstay of modern life, and most people are at least somewhat aware of the fact that film can be developed in a darkroom, the process of film development itself is less widely understood. While there are many different methods of developing film, they all rely on a number of chemicals. 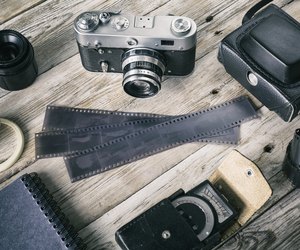 What Chemicals Are Used to Develop Film?
credit: Vitakot/iStock/Getty Images

The developer does just that: develops the film. While the image has been captured on the film, it is not visible until the developer brings out the silver halides in the film. On the negative, brighter parts of the picture will remain dark, while the darker parts of the picture will be lighter. Common chemicals used as developing agents are hydroquinone, phenidone, and dimezone. The developing mix must have high acidity, so chemicals such as sodium carbonate or sodium hydroxide are often added to the mix.

While the developer will bring out the image captured on the film, it will continue to develop the picture until it is stopped. This will ruin the film, and is what is referred to as overexposure. So, once the film has been developed to an appropriate degree, the developer is replaced with a stop bath. The stop bath neutralizes the developer and stops the film from becoming overexposed. A common chemical used in stop baths is acetic acid. While the developer could also be washed off with water, using acetic acid is both quicker and more thorough.

The chemical process involved in developing color film is similar to the black and white process. The difference is in the developing stage. A chemical consisting of paraphenylene diamine is used to develop the film. When the film is added to this color developing bath, the paraphenylene diamine exposes not only the fiilm's silver halides, but also what are called "dye couplers," which are chemicals in the film itself that are made of different colors.

How to Develop Disposable Camera Film

Around The Home
Entertainment
By: Jennifer Hudock

How to make a photogram

Around The Home
Entertainment
By: Bruno Fuerte