On computers and mobile devices, such as smartphones, data download transfer rates are commonly measured in megabits per second, abbreviated as Mbps. A megabit is equal to one million bits, data's smallest unit of measure. A data transfer speed of 100 Mbps indicates the data transfer rate of downloaded content and falls within the speed parameters offered by Wi-Fi technology, which is commonly included on computers and mobile phones. 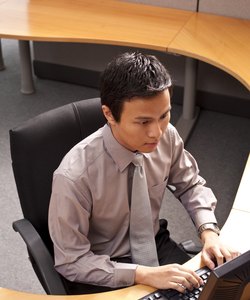 Data transfer rates are essential when it's time to access the Internet.

In computer data measurements, a bit is equal to one binary digit and is represented by two states of information, such as "yes" or "no." A kilobit is equal to 1,024 bits, while a megabit is comprised of 1,024 kilobits and is roughly one million bits. The term megabits per second represents the amount of data that is downloaded by a computer in one second. Therefore, a computer that downloads data at a rate of 100 Mbps downloads 100 million binary digits of data per second.

Most of the network capabilities on a mobile phone, such as the 2G and 3G network connectivity, will not produce data transfer rates of 100 Mbps. For instance, General Packet Radio Service, a common 2G network protocol, produces data transfer rates of up to 115 kilobits per second, while Enhanced Data for Global Evolution, another 2G protocol, transfers data at up to 236 Kbps. Evolution Data-Optimized is a 3G network technology that provides speeds of up to 2.4 Mbps, while the 3G High-Speed Downlink Packet Access protocol transfers at up to 21 Mbps. If your phone is equipped with a particular Wi-Fi standard, you will be able to transfer data at 100 Mbps on your device.

Wi-Fi is a brand name of the Wi-Fi Alliance and is made up of wireless networking technology built on the Institute of Electrical and Electronics Engineers' 802.11 standards. As of July 2011, the 802.11a, 802.11b, 802.11g and 802.11n standards are used by computers and mobile devices capable of accessing wireless networks. The 802.11b standard produces speeds of up to 11 Mbps, while the 802.11a and 802.11g standards transfer data at up to 54 Mbps. The 802.11n standard is the newest member of the Wi-Fi family and provides speeds of up to 121 Mbps. A computer or mobile phone equipped with 802.11n technology is the only wireless protocol that will produce speeds of 100 Mbps.

Can You Hook a Land Line to a Wi-Fi Router?

How to Download My SIM Card to a Computer

What Are the Advantages of GPRS?