What Happens to Text Messages When "Do Not Disturb" Is On?

The "Do Not Disturb" feature debuted with Apple's iOS6 operating system as a means of suppressing any incoming communication or push notifications during designated time periods without actually powering the phone down. But there's various different means as to how your contacts can attempt to reach you -- by calling, texting, e-mailing, etc. Hence, one common question that many iPhone users ponder is whether or not you can receive text messages when the phone is in "Do Not Disturb" mode. 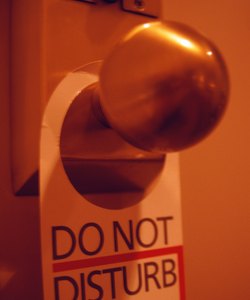 A common sign on hotel room doors, a "Do Not Disturb" function is also an option on phones.
credit: John Foxx/Stockbyte/Getty Images

DND mode was designed to allow busy iPhone users periods of uninterrupted cellular activity. For instance, business meetings and sleeping hours, where the user doesn't want to be distracted or awakened, are ideal times to implement DND mode. With DND mode, all incoming calls and text messages, as well as Facebook and Twitter notifications, are suppressed and hidden from the user until DND mode is deactivated. DND mode is marked by a half moon icon in the top center portion of the lock screen.

Although you can't get any text messages while your phone is in DND mode, you can adjust the settings so that you can receive calls from certain contacts. When adjusting the option for who to take calls from in this mode, you can select from nobody, all of your contacts, your "favorite" contacts or from a custom list you created. Additionally, you can implement a "repeated calls" setting that will alert you of a phone call should the same contact not on your already designated emergency list phone you twice within three minutes.

If you schedule DND mode to take effect during your sleeping hours, one alert that will push through is any alarm clock you have set. This ensures that users won't be bothered during DND mode times, but will still awake on time. Another thing to keep in mind is that DND mode is different than the similar "airplane mode" in that the latter just shuts down cell data, enabling push notifications to still be sent through if the device is connected to Wi-Fi.

How to Get a Phone Out of Emergency Mode

Around The Home
Entertainment
By: Jennifer Eblin

If Your iPhone Is on Silent, Can You Still Hear Your Alarm?

Around The Home
Entertainment
By: John Granby

How to Put the iPhone on Silent or Vibrate

How Do I Set My iPhone to Vibrate Only?

How to Change the Number of Rings on My iPhone

How to Use an IPhone Speakerphone