A PCI device is any piece of computer hardware that plugs directly into a PCI slot on a computer's motherboard. PCI, which stands for Peripheral Component Interconnect, was introduced to personal computers by the Intel Corporation in 1993. The technology to operate PCI is integrated into the motherboard of nearly every personal computer manufactured since 1995. A PCI connection on a motherboard can be identified as a long strip of raised copper connectors encased in plastic. This long strip of connectors is usually called a bus. 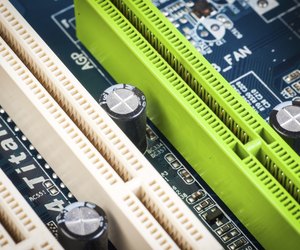 Basically, every personal computer has two primary buses, which are linked to the central processing unit. The system bus, which is also the fastest, connects main memory, or RAM, to the CPU. The PCI bus is not as fast as the system bus. Its primary purpose is to facilitate communication of hardware devices of all types such as audio, video, network or graphics with the microprocessor.

A network interface card is one example of a PCI device. It's about the same thickness as a credit card, with a line of metal connectors on one edge that fit into the motherboard's PCI bus. The network interface card works the same way as a USB network adapter, except that it connects inside the computer directly on the motherboard. There are many PCI network adapters from which to choose. The two most popular are the mini PCI and wireless adapter cards. Wireless network cards are integrated into the motherboard of desktop computers. The mini PCI is the device that is preinstalled in most laptop computers. It enables you to establish a wireless connection to a computer network with your notebook computer.

Another commonly used PCI device is the audio card, or sound card. It is a combination of hardware and software used to produce sound. Some sound cards may have their own microprocessors and RAM, as well as the basic input/output, such as microphone and speaker, connections that are on all sound cards. Software embedded within the hardware enables the PCI sound card to communicate with other programs and the computer's operating system.

The latest PCI device for video, graphics and video-editing is the PCI Express. It's the most recent standard for the PCI bus, which works with nearly any operating system and has more bandwidth than the original PCI technology.

Plug and Play helped to catapult the PCI device into the forefront in computing. The PnP technology is a feature that allows the user to simply insert the PCI card into the computer slot, and everything needed to connect the hardware to the system occurs automatically. This advance was collaboration between the Intel Corporation, who assimilated the PCI and PnP technology and the Microsoft Corporation providing the framework required in the operating system. The PCI device you connect to your computer must be compatible with your system. The computer's case has to be opened up in order to plug the device into the designated slot.

USB is another option for adapters that add functionality to a PC or laptop, such as wireless adapters. USB offers simple plug-in convenience, but is less powerful than PCI for wireless connectivity, according to a 2011 PC World article. If you have the option of both and performance is a concern, you may wish to stick with PCI.

The Specifications for a Compaq Presario F700