Speakers use drivers, including woofers, tweeters and midrange cones, to turn voltage into sound. Although speakers contain only a few parts, the physics behind their functionality can be complex. Each part plays an important role in the speaker's performance and must adhere to precise specifications to work properly. This holds especially true of the speaker baffle. 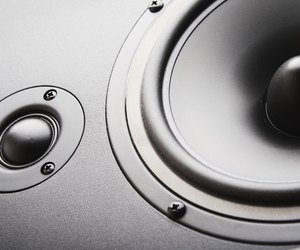 The baffle forms the front face of the speaker and serves as the mounting surface for the tweeter, woofer and subwoofer. Along with holding the drivers in place, the baffle also prevents sound from the front and the back of the drivers from colliding and causing noise interference. This function gives the baffle its name, as it confuses frequencies enough to block interference and create better sound.

A speaker driver vibrates the air at a specific frequency, creating sound through waves of energy that can be expressed as sine waves. As sound waves reflect, their timing may change enough that the opposite of the desired sound wave can reach your ear. If the original sound wave and its opposite meet at the same time, they add up to zero, as if no sound occurred.

A speaker baffle prevents reflection and absorbs sound energy broadcast from the driver, so only the waves from the front of the driver -- the desired sound -- reach your ears. The baffle's material absorbs some of the energy of sound waves that strike it, reflects the rest, and continues to do so as that wave returns. It produces an effect similar to ripples of water fading out in a pool. As they strike the sides of the pool, they lose energy until the pool is calm.

Speaker manufacturers can fabricate baffles from any material, but they typically use the same material as the speaker enclosure. Metal, plastic, wood or any solid material that will not vibrate when exposed to sound will work just as well. Baffles can be made thinner than the other walls of the enclosure. If you make your own, test them to assure that they absorb and reflect enough energy.

The physics of sound means that not all speaker drivers require baffles. Very small or low-powered drivers, such as those found in standard headphones, do not generate enough power for sound cancellation to be an issue and often incorporate their own noise-cancellation functions. Baffles take on greater importance when multiple drivers generate a range of frequencies in a larger cabinet. Baffles can also protect against environmental damage in installations such as those in car stereos.

How Are Earphones Made?

Around The Home
Entertainment
By: Tyler Lacoma

What Materials Absorb Sound the Best?

Around The Home
Entertainment
By: C.A. Rubino

The Effects of Magnets on Speakers

Around The Home
Entertainment
By: Shannon Johnson

Reasons for Subwoofers to Stop Working

Around The Home
Entertainment
By: Rebecca Burdick

How Does a Subwoofer Work?

What Does a Full-Range Speaker Mean?

Around The Home
Entertainment
By: Scott Georghiou