What Is SPDIF Output?

Moving audio between devices in digital form avoids an enemy of high-fidelity sound -- induced noise. Since digital audio travels in ones and zeros, on and off, any other signal is ignored, while regular audio cables passing through electromagnetic fields can pick up hum and other interference. The Sony/Philips Digital Interface Format developed as a standard to connect and preserve audio in digital form as far into the amplifying process as possible. 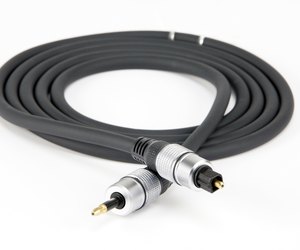 SPDIF began as a way to move audio within devices. For example, a CD player would read digital data and transmit it to an analog audio decoder, so the CD player could connect to a conventional home stereo using line-level inputs. Audio resolution is 16-bits, expandable to 24-bits, supporting sampling frequencies of 44.1, 48 and 32 kilohertz, used for CD, digital audio tape and digital satellite radio, respectively. SPDIF connections are one-way, moving from a transmitter to a receiver, though equipment can include both a receiver and a transmitter.

Digital devices use coaxial RCA connectors for electrical SPDIF connections. RCA jacks supporting SPDIF are generally coded orange to differentiate from other RCA connectors. Toshiba Link cable is the choice for SPDIF optical connections. Some equipment will use a single format for SPDIF, but many use both RCA and Toslink for greatest flexibility. When a mis-match exists, converters can be added that swap electrical signal to optical or vice versa, with most converters in the $15 to $70 range, as of date of publication.

As digital amplifiers and home theater systems developed, SPDIF and HDMI emerged as the key digital connectors. HDMI supports both video and audio, but it has not been applied universally. In some cases, home theater systems may use only the video side through HDMI connectors, while using SPDIF to support audio. While SPDIF was developed for uncompressed stereo audio, encoded and compressed multichannel surround-sound is also supported on some equipment.

While digital transmission of audio removes many of the potential shortcomings of analog, the SPDIF format has its own possible trouble spots. Though rarely a problem with contemporary equipment, digital jitter can sometimes be an issue. This is basically a synchronization mismatch and, unlike analog audio, a 75-ohm coaxial cable of 6 feet performs better at preventing jitter than shorter length cables. Optical Toslink cables don't have impedance or length issues that contribute to jitter, and short cable runs generally support error-free data transport.

Around The Home
Entertainment
By: Darrin Meyer

What Is PCM Audio?

Around The Home
Entertainment
By: Dan Stone

What Is a Digital Optical Cable Used For?

How to Hook Up Coaxial Cable to Surround Sound

Around The Home
Entertainment
By: Andrew Mayfair J.D.

How to Set the Sound Leveler on a Panasonic Plasma TV