What Is the Difference Between a VHS and a VCR Player?

In practical terms, there is not a lot of difference between VHS and VCR. VHS is a videotape cassette format, and VCR is actually the name for a type of player. But in reality, with the demise of Sony's Betamax format for home videocassettes, virtually all VCRs exclusively play VHS tapes, and virtually all videocassettes are in the VHS format. As a result, the two terms are often used interchangeably. 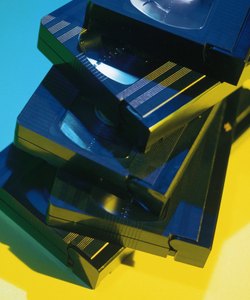 The lion's share of VCRs in the market play VHS tapes.

"Video home system" is an analog recording format developed by JVC in 1976. The system uses a half-inch wide magnetic tape and can record up to six hours of video content with 240 lines of horizontal and 486 lines of vertical resolution, as well as a stereo sound track. The format was designed to be cheap, easy to use, and compatible with a wide range of video cameras and cassette players, and by the 1990s it was the dominant video standard in the global market.

A video cassette recorder is any device that plays and records videotapes that are preloaded onto cassettes, as opposed to the older video tape recorder, which used reel-to-reel tapes. The first VCR for the home market ran Sony Betamax cassettes, but the introduction of the first VHS-compatible VCR in 1977 was the beginning of the rise to dominance of the VHS cassette format.

In the 1980s, the Betamax and VHS formats vied for market dominance, but the VHS standard eventually won out for several reasons. VHS machines were much easier and cheaper to produce, and consumers opted for the lower-priced VHS VCRs. VHS tapes were also long enough to record an entire movie; Betamax tapes had only a one-hour record time. As the number of VHS machines in the market grew, less commercial content was being offered on Betamax, which drove consumer preference for VHS still further. By 1993, Sony stopped producing Betamax tapes in America.

Other cassette formats have come along since the VHS, and cassette players have been marketed to accommodate them, although none have had the market penetration of the VHS VCRs. For instance, Sony's Video8 format was a small cassette that easily fit in a camcorder. The DAT format allowed for digital recording on small cassettes, and some camcorders and VCRs were marketed to play them. While DVD-R has largely replaced videotape in the home entertainment market, most of the remaining VCRs available handle VHS format exclusively.

Around The Home
Entertainment
By: Dan Gurrisi

Around The Home
Entertainment
By: Laura Payne

Around The Home
Entertainment
By: Gisela Chavez

How to Play PAL DVDs on My Computer

Use Your Smartphone to Record in VHS

How to Connect an Older VCR to Vizio HDTV